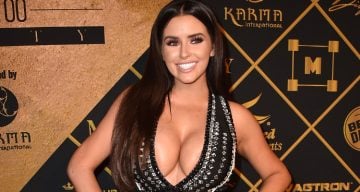 It took a lot of hard work and courage to make the tough journey from a small town to a big city for Abigail Ratchford, but she did it anyway. Today, she makes over $215,000 a year thanks to her social media activity. She is a sought after model making a move to television.

Abigail Ratchford is a model, social media personality, and actress. She modeled extensively for magazines and appeared on television. Ratchford was born on February 12, 1992, in Scranton, Pennsylvania, which makes her 25 years old. Though she was born in a small town, Ratchford moved to Los Angeles, California to pursue her career. She has been a model and actress since 2013 and is gaining a lot of popularity.

Ratchford participated in the Miss Pennsylvania pageant when she was just 20 years old. She also appeared in famous magazines like Zoo Weekly, Nuts, Sports Illustrated, Esquire, Playboy, and Maxim, earning her recognition for her looks. Abigail Ratchford’s nearly-nude and sexy pics have become sought after by many.

In 2014, after Ratchford moved to Los Angeles, she was rewarded with plenty of work. She appeared in many billboard campaigns on Sunset Boulevard and was nicknamed “The Sweetheart” by TMZ.

Ratchford appeared on TV shows like Access Hollywood, Parks and Recreation, and 8th Annual Babes in Toyland. She is a long way away from being a small town girl juggling three jobs as a paralegal, secretary, and bartender to make a living. At the time, she earned less than $750 a week. After a professional photographer friend of hers asked Ratchford to model swimsuits to build his portfolio, her luck changed. Now, Ratchford reportedly makes over $215,000 a year. The bulk of these earnings come from product endorsements and merchandise sales, which are boosted her social media accounts. Ratchford currently has nearly eight million followers on her Instagram account alone.

The new classic ???? BTS shooting with the sweet and amazingly talented @alessandrafioriniphotography ????