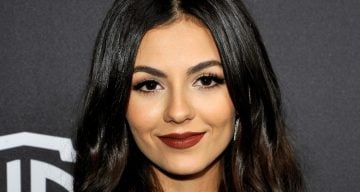 Victoria Justice is a down right hottie and there’s no denying it! Justice makes sure she looks like a million bucks and is rarely caught on the bad side of a photo. Victoria Justice’s Instagram posts are steaming, so here are our top 10 picks of Victoria Justice in her sizzling best.

Who doesn’t know Victoria Justice? The Eye Candy actress is made of pure beauty and talent, and that’s an understatement. The 24-year-old was spotted on the red carpet recently at the ACE Awards, and was looking stellar in her checkered outfit. We’ve scoped out some of the sexy bikini pics that Victoria Justice has posted, but watch out; these photos are sure to send temperatures flying!

Victoria Justice is a fan favorite kind of actress, and her popularity on Instagram proves it! Justice has over 13.1 million followers on this social media platform alone, and she doesn’t disappoint her fans one bit. Victoria Justice was last seen on MTV, with her series Victorious becoming a huge hit.

There’s plenty of fish in the sea, but none like Justice!

Sunshine and Lemonade, Summer is Here!

There’s a lot more than meets the eye when it comes to Victoria Justice. Her parents moved from Hollywood Florida, to Hollywood California when she was all of 10.

Lay With Me and Just Forget the World…

Sexy, Strappy, and So Seductive!

Her Beauty is Out of this World!

Just an alien whose spaceship landed in the desert, looking for a certain music festival & a good time ???????????? Did this really cool photoshoot right before Coachella in Palm Springs. This art installation was created by @phillipksmith3 & is called “Circle of Land & Sky”. It’s part of the #desertx 2017 art project. ???????? Creative Director/Styling: @allantroy_ ????: @bridger Makeup: @iwantalexx Hair: @mateo_sifuentes Bodysuit: @falgunipeacock ????: @privilegedshoes

Victoria Justice was dating Pierson Fode back in 2013, but they broke up in 2015.