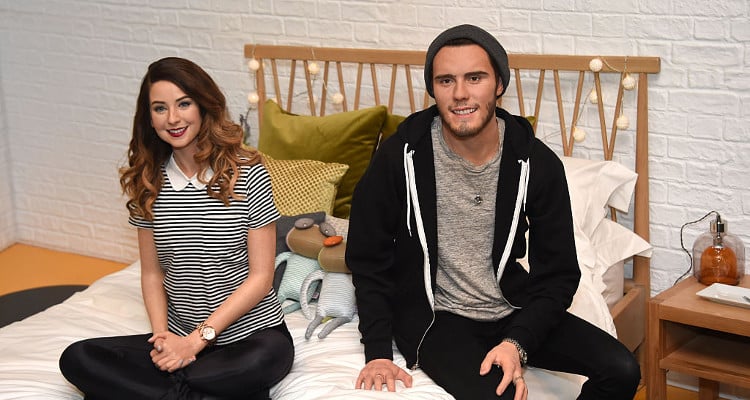 Though there were rumors of Zoella and Alfie Deyes breaking up, the couple have just announced their move to a big new house. That effectively means they are still together. Rumors of the couple’s split comes only months after Zoella’s rumored pregnancy which, for the record, she has denied. Both vloggers are thrilled to move into their new place and Zoella’s business empire is only becoming more successful.

Zoella and her boyfriend, Alfie Deyes have a big reason to celebrate. They have recently moved into a great, big new house! The couple announced their move to Brighton through their daily vlog channels. Other than the city, the YouTube personalities obviously kept the location of Alfie Deyes and Zoella’s new house in 2017 a secret. The couple filmed a video from their new house, giving their followers a tour of the home before they had even started unpacking. In the video, Zoella says, “I just said to Alfie this hasn’t fully sunk in yet. This is our first day moving stuff into the house.” Keep reading for some more details from Zoella’s wiki.

Her real name is Zoe Elizabeth Sugg, but she is better known by her YouTube username. Zoella is an English fashion and beauty vlogger, YouTuber, and author. Born on March 28, 1990, she attended The Corsham School, a secondary school and arts college. Zoella started her career by working as an apprentice at an interior designing company and started her blog, Zoella, in February 2009. It became so popular that she expanded it into a YouTube channel and continued commenting on fashion, beauty, and lifestyle.

Hello Instagram! It's #mentalhealthawareness week and if you're a new follower of mine, you might not know how close to my heart mental health is, and as I now have 11 million followers over here (thank you btw, how effing cool) I thought it was important for me to share a little bit of my journey with mental health in the hope that it might educate, inspire or encourage some of you. I've had anxiety & panic attacks through my later teen years right up until today. That's my entire adult life so far. That's a long time. Long enough at one point for me to start living my life according to my anxiety and for it to have felt so huge, and to have consumed 99% of every thought of every day (which let me tell you, is exhausting) that I didn't think there was an alternative. I thought I had to settle and learn to deal with it. Around 2 years ago I decided to start therapy to learn how to manage & work on my anxiety. I do things now that I never thought I'd be doing but it's been one of the hardest but also most rewarding things I've ever done. There were moments when I'd take 10 steps back and think all the hard work had done nothing, but standing back and looking at how far I've come now makes me realise how it's all been worth it. Nothing worth doing comes easy. There will be mountains to climb and rivers to cross but you can do it. The hardest part is starting the journey, especially when you feel so isolated, alone & at a complete loss…but you aren't alone. Everyone has something they could work on, even that person you know who looks like they have the perfect life, even THEY have something. As humans we always want to look our best. We look after our hair, nails, skin. We eat good food and work out. We spend time and money to feel good, yet not everyone takes that same time and care on the most important thing, our minds. Don't feel ashamed to speak to someone & don't settle. Take control of your mental health, don't let it control you. I wish I'd started sorting out my anxiety years before I actually did, and although I'll still have moments I struggle with a little more than others, I'm so proud of how far I've come, and you can be too! ???#hereforyou

I've talked about this mascara A LOT in my videos, but the Maybelline Lash Sensational is by far my favourite high street mascara & I recommend it to everyone! If you want 20% off on Superdrug.com until 02/05/17 use the code LOVELASH20 at the checkout. I'm going to go stock up! ? #ad

Zoella has become very influential through her channels on YouTube and social media, and she was named one of Britain’s most influential tweeters in 2013. Zoella is also an author and has published several books, including her trilogy Girl Online, Girl Online: On Tour, and Girl Online: Going Solo. No wonder Zoella’s net worth is a cool $4.0 million and sure to rise! After all, she has money pouring in from sources like her YouTube channels, books, appearances on TV shows, and her own line of beauty products called Zoella Beauty. Not bad for someone who is just 27 years old!

I love this photo & then I look at our hands and it makes me chuckle. It's like we're about to ballroom dance ?♥️

As with any celebrity, fans are eager to know more about her personal life, including Zoella’s boyfriend, Alfie Deyes. He is also an English YouTuber and author who runs the YouTube channels PointlessBlog, PointlessBlogVlogs, and PointlessBlogGames. He has also written a few books, including his autobiography titled The Scrapbook of My Life. Is Zoella engaged to Deyes? As of now, there is no information on that so one can safely assume that the two are happy taking things slow. Though they actively share their lives (and their relationship) online, fans want to see the couple take the next step, and are constantly hoping that Zoella is pregnant. This topic has been doing the rounds ever since Zoella tweeted that she was craving jelly in January of this year. In March, the vlogger sent fans into another frenzy after tweeting about a water birth conversation she had with Deyes. Though Zoella has denied the pregnancy rumors both times, fans are still hoping to hear a different tune!

Zoella is a Happy Person

I’m taking part in the Kellogg’s #SpecialK campaign with the U.N. Foundation’s Girl Up program and sharing my inner strength story. While there isn’t one singular definition for “inner strength,” eight out of 10 women feel they have not reached their full potential – a startling statistic which represents a “strength gap,” the difference between how strong a woman is (from the inside out) vs. how strong she could be, or her potential. I used to put my success down to luck and everybody around me, but last year I finally “owned” the reasons behind my successes and business doing so well. I felt too modest to say it was down to hard work and 7 years of effort, so I didn’t. When someone would ask me personally, or in an interview how my business had grown and become so successful, I would blush and say “I don’t know how this has happened.” I thought people would think I was too arrogant, or that I didn’t deserve any kind of recognition and I didn’t feel like I could “OWN IT” in the way others would tell me I should. I was having one of those really busy weeks, meeting after meeting, working on both my lifestyle and beauty collections, keeping up with my social channels and working on videos whilst vlogging and editing and managing my team and all of a sudden I felt confident in saying “I worked hard for this” and it felt GREAT! Own your successes, nothing happens if you don’t work hard for it! It might be a bit of luck, a great team and a fabulous audience, but nobody else will have the same drive and compassion within your business that you do. Finding the strength to be a more confident business lady took me 7 years, but now I’m happy to be able to tell people it wasn’t just luck! Visit http://bit.ly/2nsfDB6 for more information on how you can learn more about the strength gap and share your story with #StrongFeedsStrong #ad

Fans who want to know what the YouTube star does in her spare time should check out her social media accounts. Zoella’s Instagram is full of pictures of her in colorful dresses, doing crazy poses, spending time with her family, friends, picture of Deyes, pics of pastries and other sweets, and some adorable dogs. She also has shots of the interior of her house that show how artistic, comfy, and beautiful she has made it look. Zoella has won many awards and is one of the most well-known Internet personalities in the world, with millions of followers on her social media accounts. With her talent and imagination, Zoella is only going to get more popular as time passes.