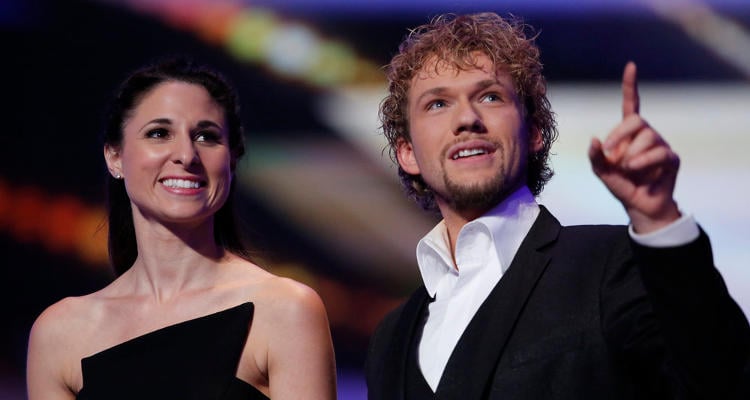 Mystical mentalist duo, The Clairvoyants may have finished second place on America’s Got Talent Wednesday night, but their mind-reading skills could give Patrick Jane (The Mentalist) a run for his money! After all, very few performers can render Simon Cowell speechless the way Susan Boyle once did. Fans who have been blown away by this fantastic duo (comprised of Thommy Ten and Amelie Van Tass) can’t stop googling more information about them. If you want to know more about the duo, including things like where they are from, are they married and how do they perform such amazing mind tricks, we have all the answers right here.

From Across the Atlantic

The Clairvoyants came very far to perform on the AGT stage. Originally from Vienna, Austria, Thommy Ten and Amelie Van Tass travelled all over the world together and performed in shows, galas, cruise ships and corporate events. Together, they’ve also won the title of ‘World Champions of Mentalism’ at the Championships of Magic in 2015, which was the first time in 30 years the title was given! Can you say spectacular! The couple isn’t married to each other or anyone else, but who knows. With their chemistry, they could be a couple!

Thommy believes his superhuman Jedi mind trick is “entertainment for the new generation.” There are very few magicians who have upped the level of magic tricks the way The Clairvoyants have. This duo’s magic tricks aren’t of the classic “pulling-a-bunny-from-the-hat” type, instead they are flabbergasting people with their jaw-dropping and sophisticated mind tricks that baffled even the biggest skeptics. This duo’s sensational magic is simply unbelievable. Every trick they perform is an innovation from their own genius.

From Dance to Mentalism

Amelie Van Tass went from bending her body to bending our minds. She was born for the stage and is no stranger to the world of performing arts, as she was a dancer from a very young age. She graduated as a professional dancer from the MoveOn Dance Center in Vienna, when she discovered her passion for the illusion arts. The self-proclaimed only female Clairvoyant in the whole world, has been wowing audiences with her partner, Thommy using her intuition. She’s living proof why a woman’s intuition should never be taken lightly!

What a nice and warm welcome here in Hollywood! We met this young and talented lady Sophie, and got a beautiful present! Thank you so much, that really made our day! @nbcagt

The Clairvoyants had a regular audition just like any other magic act. They stood center-stage, Amelie was blindfolded, and Thommy had Heidi Klum pick random items from her purse, which Amelie guessed each correctly. Then after the trick, Simon asked Amelie if she would accompany him to the cards table in Vegas, where she could put her accurate intuition to great use. In their act during the finals, the duo proved their mind powers work underwater, as well! So how do they do it? The most probable theory is Morse Code. According to one viewer, they use a Thumper, which is a very expensive device found in magic supply shops. The way it works is Thommy would use it to transmit Morse Code via vibrations to Amelie. She, on the other hand, would have to have had a lot of practice to decipher Morse Code so rapidly and give her answer. If it’s not a Thumper, another theory suggests that Thommy taps his foot to send Amelie messages in Morse Code. Still, at this point it’s only theories. After all, a magician, or two mentalists, never reveal their secrets.