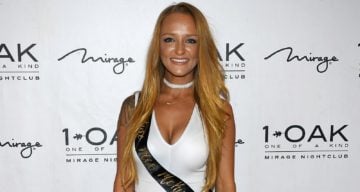 Is it going to be double, double toil and trouble for Maci Bookout McKinney and her brood pretty soon? The Teen Mom OG star recently spoke about expanding the family though adoption in the future. However, Maci and her husband, Taylor McKinney, may be about to welcome new additions to their family sooner than they anticipated. If you’re following the Teen Mom on her official social media pages, you’d know what we’re talking about. Maci Bookout could be expecting twins!

On season 9 of Teen Mom OG, Maci Bookout has opened up a lot about her family and mental health struggles. Recently, she told her mother about suffering from trauma after witnessing a shooting at a local gas station.

While fans admire her tenacity to stay strong and support her family, there’s another thing that’s caught their eye. Fans think Maci and her mom are identical enough to pass for twins.

But that’s not the kind of twinning the reality star’s family is seemingly preparing for currently. On September 22, Maci took to her official social media pages to share what appears to be pregnancy news. And the mother of three may be expecting twins.

As of this writing, comments on the pregnancy announcement have been turned off. The adorable picture of the sonogram is flanked by two baby onesies that seem to capture Maci and her husband Taylor McKinney’s surprise at finding out they are expecting twins.

Fans would recall that not long ago, Maci had spoken about having more children. But she and Taylor were considering adoption instead of having more biological children. That plan was for the distant future, as Maci confessed that they didn’t have enough time at the moment to devote to the adoption process.

However, they had a surprise change of plans, it appears. Maci and Taylor have yet to reveal when the possible twins are due, but Teen Mom fans are excited for her.

Maci Bookout and Taylor McKinney welcomed their first child together, a daughter named Jayde, on May 29, 2015. Their son, Maverick, was born on May 31, 2016, a few months before the couple tied the knot. Maci’s eldest child, Bentley Cadence, was born on October 27, 2008, from her relationship with her estranged ex, Ryan Edwards.

Update: Maci Bookout deleted the pregnancy announcement from her social media hours later, but the link in her bio still contains the news about her potential pregnancy. Some on social media have expressed doubts about the news, citing Bookout’s alleged history of posting “clickbait.” So followers will have to keep an eye on her official pages for the latest updates.