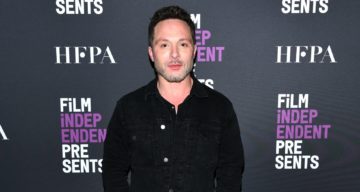 Nic Pizzolatto struggled for many years as a writer both in the publishing industry and later in the TV and movie industry before finding his foothold as a screenwriter. After proving his worth in a few Hollywood films, Pizzolatto hit the big time when he created a super successful TV show called True Detective for HBO that began in January 2014. After its success, Pizzolatto is a much-in-demand writer and producer. His first marriage to Amy failed, but after being singer Suzanne Santo’s beau for a while, he now is officially her fiancé. That’s right! Pizzolatto slipped the ring on Santo’s finger after she said an enthusiastic “Yes” to his proposal. Thanks to an Instagram post, the whole world is seeing the happy couple dreaming about their future together!

Suzanne Santo is always making news. And usually noteworthy news at that! This 36-year-old American is a popular actress, model, and social media personality, But she is most famous for her talent and skills as a singer and musician.

The gifted star has been releasing music albums from 2008 onwards and performed many music shows and concerts while on tour with her music band called Honeyhoney. And she’s also been making music as a solo artist.

However, Suzanne Santo’s love life is also a matter of deep interest to everyone. That’s why Nic Pizzolatto’s name is figuring prominently.

Suzanne Santo and Nic Pizzolatto’s relationship has been in the public eye for a while now since both started posting pictures together in obvious Cupid territory. Since both their Instagram accounts feature many photos together, most people who follow them know that Nic Pizzolatto is Suzanne Santo’s boyfriend!

Nic Pizzolatto’s movie and TV career have made him a famous man in the entertainment industry. While he lives in Austin, Texas, his work as a writer, producer, and director has made him a big shot in tinsel town.

Nic Pizzolatto started out as a writer with his short stories, novels like Galveston, screenplays, and even creative writing teaching assignments, winning great acclaim. His screenplays for films like the official remake of The Magnificent Seven (2016), Galveston, and Deadwood, have established him as a writer of great promise.

His credibility has been undoubtedly proven with the breakout success of the HBO crime drama series called True Detective. Pizzolatto created the original TV show, which premiered in January 2014. It’s gone on to become one of the most-watched TV shows in HBO’s history.

Lately, some media outlets have written about Pizzolatto’s personal life, making reference to “Nic Pizzolatto’s ex-wife.” And according to sources, he is currently divorced.

Pizzolatto was married to his wife, Amy Pizzolatto, for a long time. They have two children together—a daughter named Sheila Pizzolatto and a son, Nick Pizzolatto Jr.

The former couple spent a lot of time in Ojai, California, while their kids were young, as they were trying to raise them there away from the hustle-bustle of the big cities. Meanwhile, Nic Pizzolatto’s career kept going from strength to strength and is now lucrative with the success of True Detective.

Marriage Rumours Had Everyone Running Around In Circles!

The couple recently got engaged. You can find proof of Suzanne Santo and Nic Pizzolatto’s engagement on their Instagram accounts. They posted a very telling photo featuring the couple all smiles with Santo happily displaying her precious engagement ring! It isn’t an engagement yet unless there is a big shiny rock to show off to everyone!

It looks like Pizzolatto proposed to Santo on Christmas, and the singer said a big resounding “Yes!” And it surely sounded like sweet music to Nic Pizzolatto’s ears!

After getting her all-important approval, Pizzolatto wasted no time putting the ring on her finger, sealing the happy deal. And soon enough, Nic Pizzolatto’s status will go from being Suzanne Santo’s boyfriend to Suzanne Santo’s husband.

Pizzolatto Will Work Hard for Future Marital Happiness Every Day

In the same Instagram post informing everybody about their engagement, Nic Pizzolatto gushed about how his life has changed for the better from the moment he met Suzanne Santo, held her hand, and looked into her eyes. He has promised that he will love Santo for the rest of his life.

Love is definitely in the air looking at the Suzanne Santo-Nic Pizzolatto engagement photo. The couple are very much looking forward to 2022 and their bright future together!