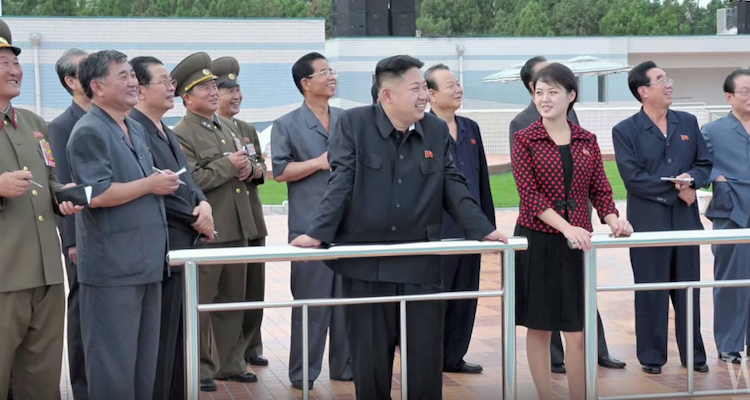 North Korea’s first lady, Ri Sol-ju is often missing from the public eye. But now, as the country recently threatened to attack a United States military base in Guam, the world has their gaze set on Kim Jong-un and his wife.

The reclusive country is now on the radar, and people are wondering who Kim Jong-un’s wife is. Despite her marriage to one of the world’s most famous dictators, there is not much publicly-available information about her. Some reports state that Kim Jong-un and Ri Sol-ju, age 27, married in 2009 just before Kim was about to succeed his father, Kim Jong-il. It took three years before Ri was seen publicly in North Korea. The couple attended a concert in Pyongyang, and reports at the time confirmed that she was indeed Kim’s wife. Unlike his predecessors, Kim is more open and engaging. His public appearances often show him to enjoy interacting with children and the common soldier. If you’re looking for Ri Sol-ju’s Instagram, she does not have one, but there are a few pics of Ri Sol-ju circulating the web.

Ri, officially identified as “his wife, Comrade Ri Sol-ju,” was born September 28, 1989 in Pyongyang, Democratic and she attended Kumsong 2 Middle School and Kim Il-sung University. Some believe her name to be a pseudonym to further protect her privacy. Reports say her mother works as the head of a gynecology unit, while her father is a university professor.

According to allegations, Ri gave birth to her child, Kim Ju-ae in 2012, but the news was never officially confirmed or publicly announced. U.S. basketball star, Dennis Rodman was visiting the country at the time, and reportedly met the couple’s daughter, eventually revealing her name.

Missing from the Public Eye

Ri was most recently seen at a missile test celebration, and it seems those are the only events where she makes public appearances. The latest event, which occurred July 10, reportedly involved a performance of the country’s state-sanctioned girl band, Moranbong Band at the Pyongyang People’s Theatre. In 2016, she appeared in three public outings with her husband, and attended seven in 2015. Rumors have continued to circulate as to why Ri disappears so often and for so long. Some say she was hiding a pregnancy, while others speculate she has been having marital issues.

Is Kim Jong-Un a father again? Ri Sol-ju, the wife of the North Korean leader, Kim Jong-un was seen again in public after being under the radar for close to nine months. The last time she was away this long was in 2012 when she had her daughter. Her new absence has prompted speculations that her recent absence could have been as a result of another pregnancy. Many had earlier feared that she had fallen out of favour with her husband, hence the absence, but now, with her reappearance and how comfortable she seemed by her husband’s side, it has been rumoured that she might have just had a son who will follow in his father’s footstep. #northkorea #northkoreanleader #kimjongun #risolju #tyrantleader #youngleader Visit link in bio for more stories on Giist.

In 2012, Kenji Fujimoto, the personal sushi chef of Kim Jong-il, once described the first lady’s voice as “charming… I cannot describe her voice, it’s so soft… She said to me, ‘Welcome to the republic. Our comrade the Supreme Commander missed you the most. He was always talking about you. Thank you for coming.’” As a gift, she gave him a Dior handbag.

Now that there are heightened tensions between the U.S. and North Korea, observers will likely be keeping an eye out to see if Ri appears again, or more often, by her husband’s side.