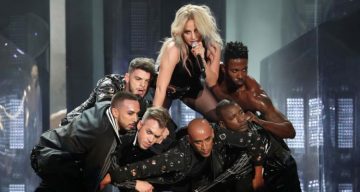 There’s a new scandal in town and it involves Joanne singer, Stefani Germanotta, known by her stage name Lady Gaga. The Lady Gaga conspiracy has some people questioning the Lady Gaga-Lina Morgana relationship and more. If you want the latest on this juicy conspiracy theory surrounding the “Fame Monster,” get all the details here with our Lina Morgana wiki.

Lina Morgana’s suicide occurred when she was 19 years old. According to her mother, Yana Morgana, her now-deceased daughter made Lady Gaga into the power house we know her to be today. Yana wanted the rights to the songs that Lina and Lady Gaga recorded together and Lina’s manager claimed they recorded at least 12 songs together. However, back in 2010, Yana blamed Lady Gaga for stealing her daughter’s style and performance techniques. The accusation came shortly after a Vogue cover story that the Born This Way singer did in raw meat. Who could forget the infamous “meat dress?!”

Yana spoke with the New York Post in an interview saying, “[Gaga] talks about having a dark and tragic life, but she had everything she wanted in the world. She went to [the same] high school as Nicky Hilton; her parents were rich. But Lina did have a tough life.”

This initial claim was of course made before the world found out that Lady Gaga was sexually assaulted in the past. Many remember her coming forward during the Oscars in 2016 as she sang, “Til it Happens to You” on stage, while playing the piano.

Is it true? Did Lady Gaga pull a Single White Female on Lina? Her mother seems to think so, and she’s not the only one who does. A source on Twitter by the name of “Retired Hoe” believes that Lady Gaga murdered Lina and took her life to boost her own fame. “Retired Hoe” continued that there are other similarities, like timing of The Fame‘s release and Lina’s death, as well as different photos. The list goes on, but things get interesting when Yana claimed that Lady Gaga was in possession of her daughter’s soul! Then there’s her “Paparazzi” video, where she was pushed off a balcony, eerily similar to the way Morgana took her own life. It could also just be that “Retired hoe” is not a fan of the multi- Grammy-winning singer and may just be grasping at straws. Lady Gaga has been silent on the subject for years and some have claimed that she flat out denied knowing Lina in the past. There’s no proof of anything of course and we can’t imagine what life would be life without Lady Gaga’s flare for the weird and unapologetic.

Her fans adore her and after looking at an Internet poll, many don’t believe the singer murdered Lina at all, but believe it to be a deranged joke or a ploy to get attention. The odds of her being capable of this are slim, but it is odd that there are certain undeniable coincidences. But that’s all they appear to be. And with a name like “Retired Hoe,” it’s kind of hard to be taken seriously. Maybe it’s time she retired her badge and leave the detective work to the professionals.