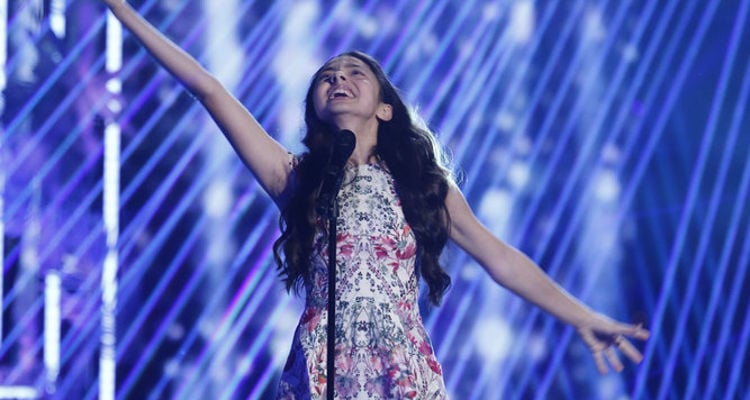 Teen opera singer, Laura Bretan mesmerized the judges and audience at the America’s Got Talent Season 11 Semifinals with her rendition of “Pie Jesu”. The talented 14-year-old’s emotive singing has brought audiences to their feet both at her auditions as well as during the AGT semi-finals. At first appearance, Bretan looked like a nervous little girl. However, when it’s her turn on the stage, she’s an expressive soprano with a larger-than-life voice. Here are some facts about Mel B’s Golden Buzzer choice.

Bretan began singing in the Church at an early age and developed an interest in classical music and opera later on. Her favorite composers include Andrew Lloyd webber and Giacomo Puccini. She sang Puccini’s “Nessun Dorma’ at her America’s Got Talent auditions and received a standing ovation from the judges and audience, as well as a direct entry to the live shows. Bretan sang Celine Dion and Andrea Bocelli’s “The Prayer” in the quarter-finals and once again brought the judges to their feet. She dedicated her semi-final’s performance of “Pie Jesu” to her grandfather which is one of his favorite compositions.

Laura believes she can connect with her listeners through classical music and hopes to popularize the operatic genre to her generation. Her stint on America’s Got Talent has also divided the classical music fields on their opinion on this rising star. Classical music professionals believe the teen’s voice hasn’t physically matured enough for the genre, while some believe she’s doing well in the complex musical art given her age. Needless to say, Laura Bretan is a shoe-in for the next round.