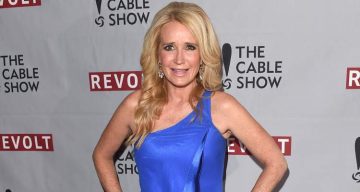 Child actress and reality star Kim Richards reportedly won’t be returning to The Real Housewives of Beverly Hills. She has had her share of problems and relationship issues, including while dating Ken Blumenfeld. Keep reading to know more about Kim Richards’ ex-boyfriend in Ken Blumenfeld’s wiki.

The Real Housewives of Beverly Hills star Kim Richards appeared on the show from seasons 1 to 5, but quit to concentrate on her health. Rumors began to make the rounds, and fans wondered if Richards would return to the show. Her sister, Kyle Richards, spoke about how she was doing in an interview revealing, “She’s with her grandchild almost every day. I see her with him and I’m like, ‘Okay you’re good. You’re so happy.’”

Just getting around to putting up my Thanksgiving photos..? I have so much to be THANKFUL for everyday ! ??I am so Thankful & Grateful everyday ❤️? I hope everyone had a beautiful & amazing day! Filled with love & light #thanksgiving #thankful #grateful #grandma #grandson #love #unconditionallove #nana @hucksleywiederhorn

“There were a few times I asked her to film with me, but she didn’t want to. I miss my sister Kim being on the show. It feels weird to do the show without my sister, honestly. I’m a creature of habit! I don’t like change,” Richards added.

Ken Blumenfeld’s age is about 52, and he reportedly lived in Westlake Village, California in 2011. Sources claim that Blumenfeld is a semi-retired financial advisor who was arrested in 2009 for a DUI.

Richards reportedly hid her relationship with Blumenfeld for almost a year before she told her sister about it. She allegedly moved in with him despite her family not being okay with their relationship. In fact, Kyle Richards was concerned about her sister’s romance, saying that Richards’ kids felt that Blumenfeld was controlling.

When Richards announced her decision to move in with Blumenfeld, her sister said, “I was so disappointed and worried to be honest. I felt she was making this decision based on convenience and loneliness, which worried me and made me sad. I do not know Ken. I have heard things that put me off, however, if Kim truly is happy, I will support her.”

This one I am so excited about! Loving the @dimyoor_beauty! The Instant Face Lift removes the appearance of lines and puffiness around the eyes in just 60 seconds, and these creams smell and feel amazing, my skin feels firmer and healthier! Wait till you see the AMAZING results ?! Get yours! Discounts to my followers here -> bit.ly/kimpromo #dimyoor dimyoor.com

Another source said at the time, “Kim thinks she’s in love with someone who cares about her, but Ken is a controlling nightmare and he’s not right for her.”

“The family doesn’t like him, he’s controlling and Kim shouldn’t be living at his house. Kim went through a lot last year with her drinking problem and the pressure from the show and her relationships only trigger Kim’s addiction. Kim should not be with this guy, he’s no good for her,” the source further added.

However, Kyle confirmed that Kim Richards and Ken Blumenfeld were no longer together in 2012.