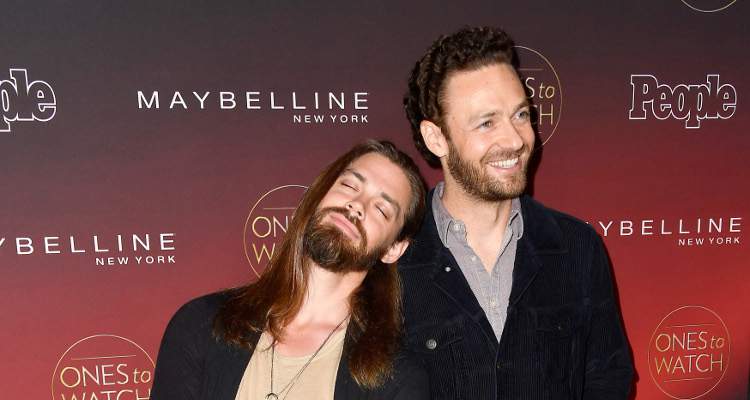 Like Aaron on the hit show, Ross Marquand from The Walking Dead is gay in real life.

The Walking Dead’s Ross Marquand kept his personal life very private. But fans can’t help but wonder if Marquand is also gay. If you find yourself asking the same question, then here’s what you need to know.

The multi-talented actor who is best known for his role on The Walking Dead has not commented on his sexual orientation, despite the countless rumors swirling around. Read on for more about Marquand’s relationship status.

Rumor has it that the actor who portrays one half of TWD‘s first gay couple is gay in real life. But the actor has kept his personal life so well hidden, that there are no sources to prove it. However, whether he is gay or straight, there is no denying that Ross Marquand has a great sense of humor.

Back in 2013, the actor tweeted that he is hanging out with his “girlfriend” and that she was hilarious. Just when fans started to wonder who he was dating, it turned out to be Wyldstyle from The Lego Movie.

Hanging out with my new girlfriend…she's hilarious.

What Happened on The Walking Dead Season 8 Episode 3?

Ross Marquand began his The Walking Dead journey when he was cast as Aaron, and quickly became a fan favorite. He was one of the first gay characters on the show, and his love interest was Eric Raleigh, played by Jordan Woods-Robinson. On the show, the couple met at an NGO where they fell in love.

After fighting the undead together, and helping out against the walkers, season 8 of The Walking Dead broke our hearts when Eric was shot. Though the bullet went through him, we saw Aaron pull Eric by some trees to safety, and go back to battle.

When he returns, he see’s a bloodied tree trunk, Eric’s rifle, and to his sorrow Eric, now a walker, wandering away towards a nearby herd.

Ross Marquand is a voice actor as well, and worked in hit shows like Disney’s Phineas and Ferb, and Conan. He is also a skilled impersonator who can impersonate the likes of Harrison Ford, Kevin Spacey, Brad Pitt, and even Matthew McConaughey.

Marquand has kept mum about his relationship status, and we are left with nothing much to go on. Though there is no confirmation about Ross Marquand’s sexual orientation, we definitely know that he is a skilled actor.

Good @people of the world…thanks for having us!

Ross Marquand’s Instagram account is no help either, as he mainly posts pictures about the show and does not have much about his potential partners. Though, there are quite a few pictures with Tom Payne, letting fans know that their bromance is still alive and well!

Don’t forget to watch The Walking Dead Sundays at 9:00 p.m. EST only on AMC.