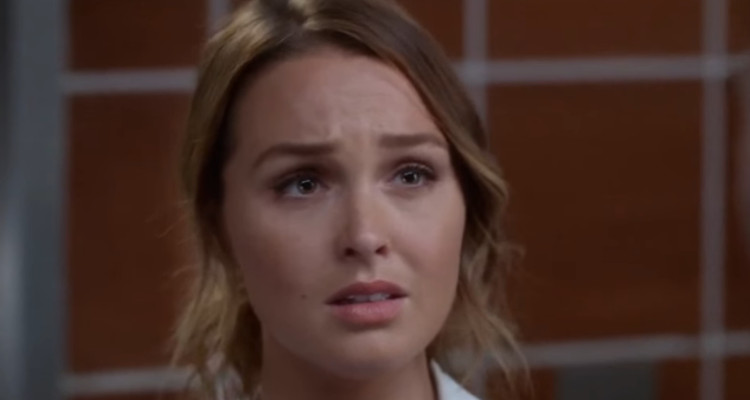 What time does Grey’s Anatomy come on tonight? TGIT is back tonight, and it kicks off with a brand new episode of the hit medical drama. Grey’s Anatomy is back on TV, and after the cliffhanger of a fall finale, we can’t wait to see what happens next! So, sit back and relax as we spill some juicy details about Grey’s Anatomy season 14, episode 9. Look away now if spoilers aren’t your thing!

Our favorite show is back on television! To celebrate, we want to give you a first look at what tonight’s episode will bring, with some Grey’s Anatomy spoilers!

Titled “1-800-799-7233,” tonight’s episode takes off where we last left off. Some fans may be quick to note that the number in the title is the National Domestic Violence Hotline. Originally titled “Four Seasons in One Day,” it was changed to raise awareness of domestic violence.

That, in itself, is a big hint as to what we can expect. For more, keep reading because we’ve got the scoop on what’s going down tonight!

The Drama from Episode 8 Continues…

Grey’s Anatomy always keeps us on the edge of our seats, and tonight’s episode will be no different! Since November, we’ve been waiting for Grey’s Anatomy season 14, episode 9 air date to finally get some answers.

We can’t wait to see these faces again! ? ?: @seekellymccreary #GreysAnatomy

A sneak peek of the episode 9 trailer offered us some clues about what’s going to happen tonight.

The last time we saw Jo (Camilla Luddington), she was rushing out of the elevator trying to save a patient’s life, when she came face to face with Paul Stadler (Matthew Morrison), her abusive ex-husband! Cue the gasps!

Shocked that the man she tried to hide from has finally found her, Jo is lost for words. Paul smiles and just says, “Hey, Brooke. Oh, wait, it’s Jo now, right?”

Wait, what just happened? Shonda Rhimes just threw a curveball we didn’t see coming! Sweet Jo has tears in her eyes as she sees her estranged husband. To add to the pain, he has a mystery woman clinging to him!

Meanwhile, the FBI is still investigating the hacking of Grey Sloan’s computer systems. But that’s a side story after the revelation of Jo’s ex-husband!

Jo hasn’t told anyone about her past, and as she’s trying to deal with the situation, Dr. Arizona Robbins (Jessica Capshaw) might fall for Paul’s charm.

As for the mystery lady on Paul’s arm, she is introduced as Jenny, his fiancée. Bethany Joy Lenz joins the Grey’s Anatomy cast as the new woman. But how long will she stay? Does she know Paul’s history with Jo?

How Does Jo React to Paul’s Sudden Appearance?

Will Jo run away from her worst nightmare, or will she stand up and face her tormentor? So many questions are running through everyone’s minds!

We’re guessing that Jo breaks the silence of her past, even as Meredith Grey (Ellen Pompeo) says, “She is not going to be alone with him.”

Camilla Luddington, who plays Jo, had some more information to share in an interview with Entertainment Weekly:

“It picks up exactly with that same beat walking out of the elevator, and you see her paralyzed. Jo is honestly trying to get ahead of the situation and do any damage control that she knows he will try and do. That’s, in general, how you see Jo handle the rest of the episode.”

…..head over to @greysabc for teasers. Also- I’ll be taking over the IG account tmw.. ❤️ #greysanatomy

Luddington also explained that Jo is worried for Paul’s fiancée, adding that her colleagues, especially Alex, come alongside her even as she stands up to Paul’s manipulative ways.

What a relief to know Jo will be okay!

Watch all the drama unfold as season 14 of Grey’s Anatomy airs Thursdays at 8:00 p.m. EST on ABC.