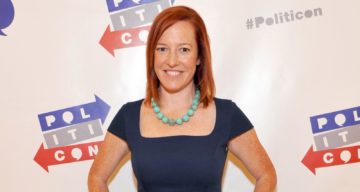 Gregory Mecher knows very well that his wife’s White House job is demanding. Jen Psaki’s husband, after all, has been the communications point man for a number of Democrat politicians. Mecher’s resume boasts stints in the offices of Kennedys and the Democratic Party. Though their jobs meant they were often in different states, their relationship continues to stand strong. And Mecher will be the supportive husband when Jen Psaki serves as press secretary in the Biden-Harris administration. This Gregory Mecher wiki reveals more on his career and their marriage.

Gregory Matthew Mecher was born on September 30, 1976. He is the son of Mary Ann Mecher and Michael Mecher.
The Mecher family hails from Cincinnati, while Gregory is currently a resident of Virginia. His mother taught fourth grade at a local school and his father retired as an engineer for HK Systems in Hebron, Kentucky.

Mecher graduated from Northern Kentucky University in 1999 with a BA in communications and television production. Before he graduated, he was active in the campus political scene that makes him one of the most esteemed alumnus of NKU.

His first two years, he commuted between his home in Cincinnati and NKU. Occasionally, he lived with his grandparents who were two miles from campus.

This did not deter Mecher’s extracurriculars. That included serving as the president of the NKU Student Government Association (SGA).

He had been a member of the student senate for two years before he emerged as the head of the SGA. His term as president earned him the opportunity to fly to Washington, D.C., and meet with political bigwigs. That proved the start of his D.C. career.

Shortly after graduating, Mecher moved to the nation’s capital and began working in the offices of major political names.

While he was on the NKU Board of Regents, a fellow regent got him an internship in the office of former Congressman Ken Lucas. With that experience, he sought jobs on Capitol Hill successfully.

He also worked for the office of former U.S. Representatives Steve Driehaus and Patrick Kennedy. He was Chief of Staff for Rep. John Kennedy III and worked with the Democratic Congressional Campaign Committee.

Connecticut natives Gregory Mecher and Jen Psaki married on May 8, 2010. The wedding was at Woodlawn Farm in Ridge in Maryland.

Mecher and Psaki’s jobs often kept them apart in different states while on campaign trails. That, however, didn’t affect their marriage, and they are still going strong.

While Psaki was in the communications team of the Obama administration, she and Mecher were expecting their first child together. Their daughter, Genevieve “Vivi” Mecher, was born in June 2015.

Vivi Mecher became quite the Internet sensation when she was less than a year old. She tagged along with her mom, then the White House communications director, to work and found a playmate in then-President Barack Obama.

Psaki mentions on social media that she and Mecher have one more child. But information on their second child is scarce.