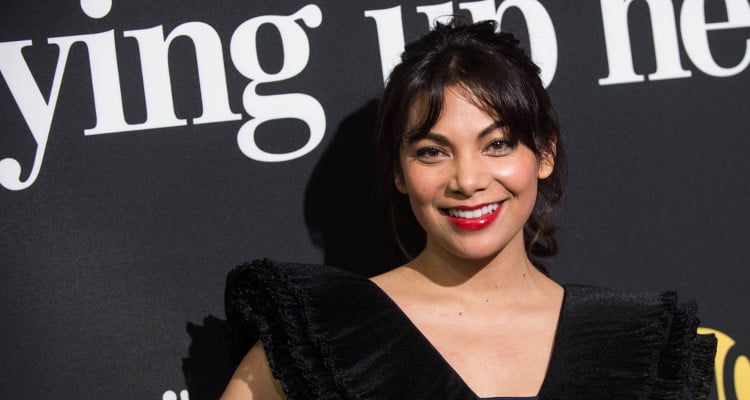 If you loved Lost and Gilligan’s Island, you must love the new deserted island show TV has to offer. After an entertaining first season, Wrecked is back with season 2. Which means more Ginger Gonzaga hilarity!

Ginger Gonzaga as Emma might be stranded on an island on Wrecked, but we don’t want her or her plane-wrecked funny castaways to escape. The hilarity continues now that Wrecked season 2 is here. And we’re watching it because we can’t get enough of Gonzaga. In fact, we’re celebrating Wrecked season 2 with Ginger Gonzaga’s wiki.

Her Male Friends Stole Her Jokes

The Filipino-Dutch TV personality got three things while studying at UC Santa Barbara: A Bachelors in Political Science, some Chinese-speaking skills, and a few pounds —none of which helped her in her acting or comedy career. She was also a nationally ranked debater. So it’s better not to argue with her.

But she had a knack for comedy. Otherwise, why else would her male college friends use her jokes? “When I got into college, I didn’t know for sure that I was funny, and then I lived with all guys. All of my male roommates would steal all the jokes I had earlier in the day and use them to hit on girls.”

The best thing about being a half Asian kid was pretending I was being kidnapped when I was in public with my white mom.

She Graduated Early for the Groundlings

Gonzaga’s comedy and acting skills were honed by the Groundlings improv group and the Second City Theater. Awestruck by Melissa McCarthy’s set, she auditioned for the Groundlings in her sophomore year of college. She was accepted, but couldn’t join right away because she was still a student. So she did what she had to do and graduated early.

She participated in the CBS Diversity Sketch Showcase and performed in comedy clubs in L.A. She’s even performed overseas, specifically, U.S. military bases in South Korea. Her most noted TV roles include Christy in HBO’s Togetherness and Peggy in FX’s Legit. She made her big screen debut in Seth MacFarlane’s Ted. These days, she’s one of the castaways on deserted island in TBS’ Wrecked. Her net worth hasn’t yet been calculated but it’s surely on the rise.

Sometimes when I drink imaginary orange juice i'm like "UGH, there's too much PULP in this FICTION!" hahhaha! #bemyfriend

She Has a Great Set of Pipes

Gonzaga is an actress, writer, director, debater, comedian, and a singer! She hasn’t professionally debuted as a singer, but she did sing jazz at various Hollywood hotspots. There was a time when she dreamed of a dual career in both singing and acting. But knew she couldn’t juggle both simultaneously.

“I had to choose acting in order to focus my time, and avoid this recurring dream I had every time I was trying to both sing and act,” Gonzaga. The Morning After host said every time she thought of a dual singing-acting career she’d dream she got an F in class because she was too busy to study. But she does hope for a role where she can sing and “combine the best of both worlds.”

I'm gonna name my adopted daughter Chanel so you know how much she cost.

What Is Her Style of Comedy?

According to Gonzaga, she writes clever dark comedy that comments on society. She has a sketch she wants to create but hasn’t gotten to it yet. “I wanted to interview Sarah Palin in character during her height of awesome idiocy, but she’s hard to track down. There are just too many Walmarts in America, I didn’t know which one she would be at.” Dark comedy indeed!

Her Twitter, where she talks about a mystery boyfriend, is also testimony to her witty humor. She sees herself as a Charlize Theron-lookalike (she admits she has a healthy self-esteem) and a Nobel Prize-winner. If she’s not getting that Nobel for making everyone laugh, she might get one for accomplishing her lesser-known goal, “Stopping all the Kim Kardashians of the world from procreating.”

Hate to brag, but I'm dating an UNDERWEAR MODEL! (or at least that's what I think he is, since he's always in my room modeling my underwear)