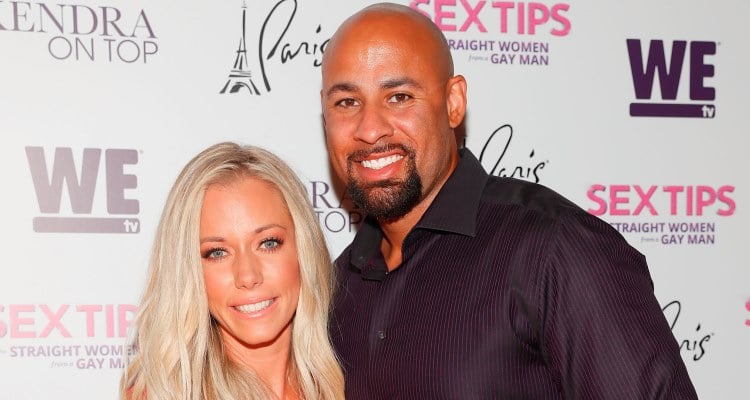 Former NFL football player Hank Basket is gay, which has led to divorce rumors for he and his wife, Kendra Wilkinson.

Is Hank Baskett gay? Many all over social media are convinced that the former NFL player is gay and that is the reason why his wife is filing for divorce. Since there are plenty of rumors swirling around, we have decided to get to the bottom of it all. So, we are here to set the record straight on Baskett’s sexuality and the state of his marriage.

Remember when people claimed that Hank Baskett cheated on Kendra with transgender model, Ava Sabrina London? Well, many have speculated that alleged moment to be a big reason for their marriage troubles. Baskett, 35, cheated on Wilkinson, 32, when she was eight months pregnant with their daughter!

On Monday, Wilkinson took to Instagram to reveal a few emotional videos about the state of her marriage. She and her husband have two children together: Hank IV, 8, and Alijah, 3.

“Ten years,” she said, crying. “I did everything I could. It wasn’t good enough. I will always love him and my heart will always remain open for him. I believed in forever, I really did. Guess it’s just not meant to be. I’m so scared, but I have to get strong for my kids — I will.”

“Thank you to all my friends and family for supporting me at the moment,” she continued. “Every little ounce of love helps, thank you. I never thought I’d see the day, really.”

After her followers saw the videos, many have speculated that Wilkinson is finally getting a divorce and that she tried her best to keep the marriage together.

“Things have been at an all-time low recently,” a source told E! News adding that Kendra wants out of the marriage and is planning to file for divorce soon. “She wants to make sure she is making the right decision for her family, but has truly hit a breaking point,” the source stated.

Wilkinson also posted a cryptic tweet about Monday being the saddest day of her life and that she will need to be stronger than ever for her kids. Wilkinson has been married to Baskett since June 2009 and this June will have been their 10-year anniversary.

Today will be the saddest, scariest day of my life. Today i will have to be the strongest I’ve ever been. Today, my rebirth begins.

There’s always a moment where male celebrities have their sexuality questioned, even famous athletes. Everyone wants to know who they’re into or if they have ever hinted at playing for another team, no pun intended. As we all know, a man having a wife and kids at home doesn’t mean he’s not gay. In Hollywood, they call that acting. After years of feeling they had to hide who they really are, many celebrities have come out and embraced their real selves.

Is Baskett one of those people? The short answer so far, is no. The rumors with London are all anyone has to go on and the LGBT would consider her a woman, despite her past. While it looks like Wilkinson is looking for a divorce, we’re going to have to wait and see. As for confirmation that Hank Basket is gay? That’s all they are at this point; rumors. Unconfirmed.