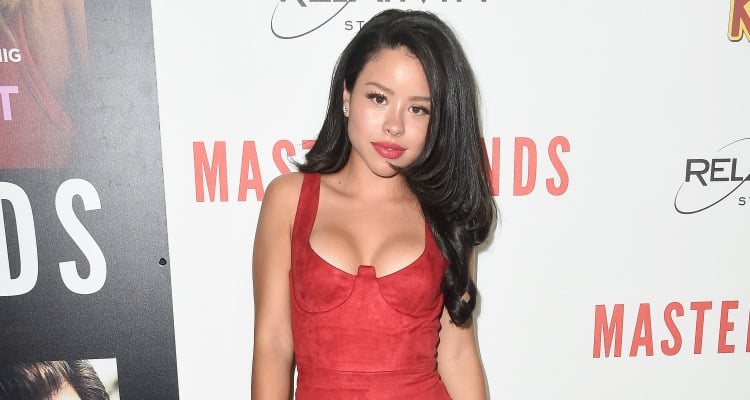 Drink, Slay, Love, Lifetime’s latest movie is based on the bestselling 2011 young adult novel by Sarah Beth Durst. It premieres tonight on Lifetime at 9:00 p.m./10:00 p.m. central and the reputations of the cast precedes their work. Check out all you need to know about the Drink, Slay, Love cast prior to it airing tonight!

Regular viewers of the network are most likely already familiar with Lifetime’s propensity for producing and airing dramatic oddball movies that feature stellar casts, and this one is no exception to that rule. The cast of Drink, Slay, Love is full of hot, young actors, many of whom also happen to have a number of talents up their sleeves. If you’re as excited for the premiere of this awesome new vampire flick, then keep reading to learn more about the amazing cast involved!

This Drink, Slay, Love movie that everyone is buzzing about is a new Lifetime movie that’s based off a 2011 novel of the same name. The title is obviously an homage to Elizabeth Gilbert’s popular 2006 memoir entitled Eat, Pray, Love. The story itself, though, is actually very uniquely rendered, despite the fact that it exhibits many of the same horror book and movie clichés that fans have come to expect of the genre.

The protagonist, Pearl, is your average 16-year-old vampire who hungers for human blood. She also has a strong aversion to daylight and garlic. All of these things are pretty standard tropes within the vampire genre. Everything seems normal until one fateful night when Pearl goes on a run-of-the-mill hunt for her next victim and is faced with a mystical unicorn instead! The unicorn stabs Pearl in the heart with his horn and then vanishes into thin air before she has the chance to retaliate. This incident has a rather strange effect on Pearl. For one thing, she discovers that she’s no longer sensitive to sunlight or garlic and, get this, she begins to develop a conscience and feels guilty about consuming human blood! Unfortunately, when her family discovers what happened to Pearl, they decide to take advantage of her new abilities. They enroll her in high school with the intention that she’ll make new human friends and lure them to the ‘Feast of the Vampire King of New England,’ which Pearl’s family is hosting this year.

Fans of the book, the young adult genre, as well as the horror genre, have all hailed this novel a diamond in the rough, stating that it’s just as deliciously hilarious and entertaining, as it is tantalizing. With that in mind, it’s time to talk about the amazing cast of Drink, Slay, Love!

Bella Thorne is a former Disney Channel star, most famous for her roles in various TV shows, including Shake It Up (2010-2013), Big Love (2006-2010), and the short-lived My Own Worst Enemy (2015), which only aired 9 episodes before it was cancelled. Even though Thorne isn’t even 21 years old yet, she’s already appeared in countless other TV and small film roles. However, her involvement in the new Lifetime movie, Drink, Slay, Love will be predominantly behind the scenes as an executive producer. Of course, Thorne has worked with The Lifetime Movie Network before when she starred in their made-for-TV flick, Perfect High in 2015. Bella Thorne has been romantically linked to a number of famous men, including most recently, Scott Disick. She was also romantically involved with 24-year-old actor, Gregg Sulkin, who plays Cierra Ramirez’s love interest in Drink, Slay, Love. Hopefully things weren’t too awkward during filming and they were able to keep things professional!

The wait is almost coming to an end! Get to know me as Pearl in the upcoming film @drinkslaylove, premiering at 10PM PST/EST on Saturday, September 16th on @lifetimetv. You'll definitely wanna sink your teeth into this one 😉 #DrinkSlayLove

This 22-year-old Columbian-Mexican beauty is a Jill of many trades! Not only is she a well-established and accomplished actress, but she’s also a model, a dancer, and a very talented singer! From a young age, Ramirez always loved singing and her talent eventually led her to small screen success and recognition. At the tender age of 10 years old, Ramirez performed during a segment of Showtime at the Appollo and since then, she’s appeared as the opening act for many big names in the music industry, including the funk group Earth, Wind, and Fire and Chicago. Ramirez currently stars on the wildly popular Freeform channel series, The Fosters (2013-present), which was recently renewed for a fifth season.

Gregg Sulkin is an accomplished young British actor, who’s appeared in numerous TV shows and films alongside other famous names such as Helena Bonham Carter, mostly in supporting roles. Like his more famous Drink, Slay, Love co-stars, Sulkin also dabbled in some Disney Channel shows before taking on a few more mature roles. He played the recurring role of Selena Gomez’s teenaged love interest on the hit show Wizards of Waverly Place (2007-2012) and since then, he’s had supporting roles on other sitcoms such as Melissa and Joey (2010-2015). He also appeared in 4 episodes of Pretty Little Liars in 2012.