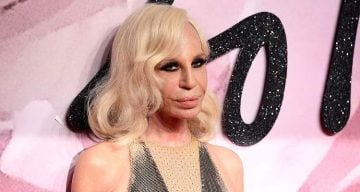 Gianni Versace tapped his sister, Donatella Versace, for his fashion house because of her natural talent for public relations. She was a fixture by his side as the rock ‘n’ roll designer’s muse.

After her brother’s death, Donatella Versace became the face of Versace S.p.A. Her trademark style has spouted dozens of copycats, but her face is inimitable.

However, Penelope Cruz comes remarkably close to the O.G. in The Assassination of Gianni Versace: American Crime Story! Cruz channeled the old Donatella Versace and nailed the way she looked decades ago.

Now 20 years after her brother’s death, Donatella Versace’s physical appearance has changed drastically, and not just because of age. This has many wondering why the fashion mogul looks the way she does now.

The Many Faces of Donatella Versace

Donatella Versace is the youngest of the Versace children. Her brother, Gianni Versace, followed in their dressmaker mother’s footsteps and completely took over the fashion world.

Although, Versace followed her brother to help with the public relationships side of things, Gianni Versace found a better use for her as a muse and critic.

Donatella Versace entered the fashion world when her brother launched a perfume called Blonde, which he dedicated to her. He also gave her her own label, Versus, which was later brought under Versace S.p.A.’s umbrella.

#TerrifyingCelebs Donatella Versace (If this plastic surgery fail doesn't scare you, nothing will) It's like watching her become a werewolf! pic.twitter.com/G6LnhRcY4V

At 37, Donatella Versace had worked with her brother for more than a decade while raising her children, Allegra and Daniel Versace. She was at her most natural with her real full lips before 1997.

Wow Donatella Versace before and after surgery Jesus Christ why did you bother ??? pic.twitter.com/vnji8vsbZ7

In 1997, three months after her brother was killed by Andrew Cunanan in Miami, Donatella Versace arrived at the VH1 Fashion Awards looking fresh-faced and noticeably younger than 42.

That same year, she attended the Met Gala with Cher and Madonna.

The Look of a Power Player

As the new head of design of Versace S.p.A., Versace steered the company into a new direction. A year after Gianni Versace’s death, she held her first fashion show in the Versace Atelier at the Hôtel Ritz Paris, a venue her brother always used. She built the runway over the pool just as Gianni did every season, but she chose sheer glass.

The show was successful enough to take away attention from the family’s personal tragedy to their designs. Around that time, Donatella Versace started sporting her signature makeup trend, which included her trademark smoky eyes and bronze tan.

Divorced from former Versace model, Paul Beck, in 2000, Donatella Versace’s face appeared quite different by 2002. Cosmetic surgery experts believe fillers were the cause.

In 2013, Donatella would herself admit that Botox is part of her beauty regime and doesn’t believe in an “all-natural” look for women.

Versace was reportedly addicted to drugs but gave them up in 1997 after her brother’s death. However, reports say she started abusing them again years later.

After a breakdown during her daughter’s 18th birthday party, Versace checked into rehab in 2005. Post-rehab, her tanned look got darker, and she sported drastically different lips, compared to her natural full ones. Her new moue would go down in pop-culture infamy as the “Trout Pout.”

You mean, Donatella Versace and Kanye West invented the selfie on a Motorola Razr? This was back in 2005; Your photos are timestamped in 2006. @TeamKanyeDaily pic.twitter.com/wusR8QtLAB

In 2008, Versace ditched the tanner and appeared to have cut back on the fillers. Her face still looked like it went under the knife a few times, though.

The Surger … has posted donatella versace before and after surgery a new pin find and view – http://t.co/9swGXQs2CM pic.twitter.com/DqJnSLj0wg

By 2011, the lines start showing on Versace’s face. Now, her skin looks different, and her face is now almost unrecognizable from the old Donatella Versace. Cosmetic surgeons believe that she underwent quite a few procedures over the span of a few years.

Versace’s toned physique also got a few stares. And, some reports claim that Donatella said she stopped working out with a trainer because they wouldn’t let her smoke.

New post (Jennifer Lopez and Donatella Versace – Glamour&#39;s 2011 Women Of The Year …) has been published on – https://t.co/mcAAVs0lTN pic.twitter.com/vQznHyUJDu

Lady Gaga combing her hair with a fork next to Donatella Versace (2014) pic.twitter.com/FYB8wIKrEd