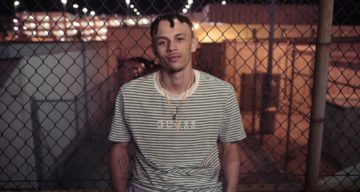 Last Chance U: Basketball turns the spotlight on the East Los Angeles College Huskies coached by John Mosley. From the trailer and the premiere of the Netflix show, we are instantly drawn to the story of Deshaun Malik, aka Deshaun Highler. The Captain of the Huskies overcame personal losses to shine on the court. Since the show premiered, fans want to know where Deshaun Highler is now and if he is still playing. We reveal that and more in Deshaun Highler’s wiki.

Deshaun Highler, or Deshaun Malik as he goes by on social media, was born on March 9, 1998. He is the only son surviving his parents, Tony Highler and Jennifer “Jenny” Lake.

Deshaun lost both of his parents within the same year, forcing him to mature early and fend for himself. His mother Lake passed away on October 18, 2018 of breast cancer.

Deshaun, who grew up in Riverside, California, has shared his memories of basketball with his mother. Watching her son and the Chicago Bulls play were some of her favorite things to do.

Deshaun says on Last Chance U: Basketball that his mother’s diagnosis had been tough. But his mother made him promise he wouldn’t let her death get in the way of his basketball dreams.

Deshaun Highler had been drawn to basketball since he was two. He looked up to Allen Iverson and dreamed of becoming a pro like him.

It was mostly him and his mother when he was growing up, and she supported his dreams. She introduced him to a spring league run by “Riverside legend” Marvin Lea when he was 14. Lea would coach Highler through his Team Eleate program.

Highler graduated from John W. North High School in 2016. He was earmarked to play for Lea’s post-graduate program at Carnegie Prep.

Highler went on to play for the University of Texas at El Paso as a walk-on after graduating from high school. He was going to earn a full scholarship, but after his first year, some faculty changes led to his financial aid being denied.

After he moved back to California, his parents had passed away. His mother hadn’t wanted him to give up on his dreams. So, about two weeks after she died, he had enrolled in East Los Angeles College and was playing with the Huskies coached by John Mosley. 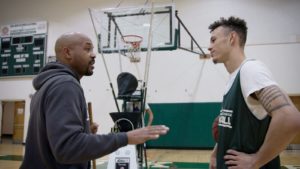 Highler quickly became the captain of the team. The coaches relied on him to keep the team together, and the shooting guard’s peers let him lead them.

Where Is Deshaun Highler Now?

Highler’s remarkable skills on the court shone during his two seasons at ELAC. Unsurprisingly, Sacramento State scouted him, and he transferred to their program.

Highler majors in computer science while playing guard for the Hornets.

Highler has been dating a woman named Kiera Lusk since his mother died. They connected through Instagram when Highler slid into her DMs.

Lusk reached out to Highler after his mother passed to comfort him. Their relationship started from there.

Kiera Lusk is an entrepreneur with her own businesses. She is the owner and CEO of the haircare line KayKurl LLC and runs a catering business, Kays Kitchen.