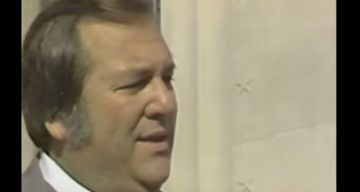 The Medellin Cartel led by Pablo Escobar never forgave a betrayal. And when Barry Seal turned against them, they simply had him gunned down in Baton Rouge, Louisiana.

American Made is a light-hearted take on the life and crimes of Barry Seal, an ex-TWA pilot who became a smuggler for the Medellin Cartel, but later testified against them. In the movie, Tom Cruise portrays Seal, the man who almost got away.

The CIA walked away from Barry Seal after he was gunned down by hired killers in Baton Rouge, Louisiana, on February 19, 1986.

Who was Barry Seal? He was an airline pilot who became a major drug smuggler for the Medellin Cartel of Colombia. When he was caught and convicted for his crimes, he became an informant for the DEA and testified in several major drug trials.

Barry Seal’s death was ordered by Pablo Escobar, the head of the dreaded Medellin Cartel. The life of a man who became rich by playing all sides in the war on drugs came to an end.

Barry Seal’s wife was Deborah Ann DuBois. He had three children with her.

With the release of American Made, a film loosely based on Barry Seal’s life, the spotlight has fallen squarely on the life and times of the man who lived his life on the edge. Here are a few details from Barry Seal’s wiki.

He was born on July 16, 1939, in Baton Rouge, Louisiana, to Mary Lou Delcambre and Benjamin Curtis Seal. Barry Seal’s age was 46 when he was killed.

Seal was a naturally gifted pilot and started learning to fly planes at the age of 16. A year later, he earned his student pilot’s certificate.

After spending six years as a pilot in the 20th Special Forces Group of the Louisiana Army National Guard, Seal joined TWA as a flight engineer in 1967. Due to his exceptional flying skills, he soon became a command pilot and flew a Boeing 707 on a regular western European route, becoming one of the youngest pilots in the TWA fleet.

Seal was fired in July 1972 when he was arrested for conspiracy. He tried to smuggle a shipment of plastic explosives into Mexico using a DC-4 plane.

He started smuggling small amounts of marijuana in 1976. But within a couple of years, he began smuggling large amounts of cocaine because there was more money in it. And although he was arrested for smuggling once in Honduras, he continued to expand his operations in the United States.

William Bottoms, Barry Seal’s former brother-in-law, became the main pilot in his smuggling ring while Seal himself oversaw planning and operations. Then, he started smuggling cocaine from Colombia and Panama into the United States and made as much as $500,000 per flight. He became the “point man” for the Medellin Cartel in getting drugs to the U.S., and started a bigger operation in Mena, Arkansas.

Seal was arrested for smuggling and was indicted, tried, and sentenced to 10 years in prison. Wanting to avoid jail time, he struck a deal with the DEA and agreed to become an informant against the Medellin Cartel in March 1984.

Using equipment supplied by the CIA, Seal collected photographic evidence of drug smuggling at the Nexus between the Medellin Cartel and the Sandinista government in Nicaragua. Always with his eye on the money, he operated as both a bonafide smuggler and informant, playing all sides of this twisted game of drugs, guns, and money.

There is no information on Barry Seal’s net worth, but it must have been substantial. In 1981, he was making daily deposits of $50,000 into an account at a bank in the Bahamas.

However, when a drug shipment was seized by the DEA, the Medellin Cartel blamed Seal for the loss. Things became worse when a report in the Washington Times on July 17, 1984, named him as an informant and smuggler, putting his life in danger.

The plan to mount a sting operation to capture the Medellin Cartel leaders fell apart, and they were alerted by this disclosure.

The Price of Betrayal

Seal took the Medellin Cartel’s threat on his life lightly. He testified against them as well as the Nicaraguan government, exposing their deals and providing the pictures he took. He was sentenced to five years probation and six months at a halfway house.

While Seal was at the Salvation Army facility on Airline Highway in Baton Rouge, the contract killers sent by Pablo Escobar gunned him down. With his death, the DEA’s investigation came to an abrupt end. His killers were caught and sentenced to life without parole.

The man who made tons of money and played all sides as he continued to smuggle drugs, was killed while trying to get away from his past.

American Made stars Tom Cruise as Barry Seal and takes several detours from Seal’s real-life story. Although he got carried away by the notion that crime pays, it is important to remember that when retribution came looking for Seal, no one could help him.