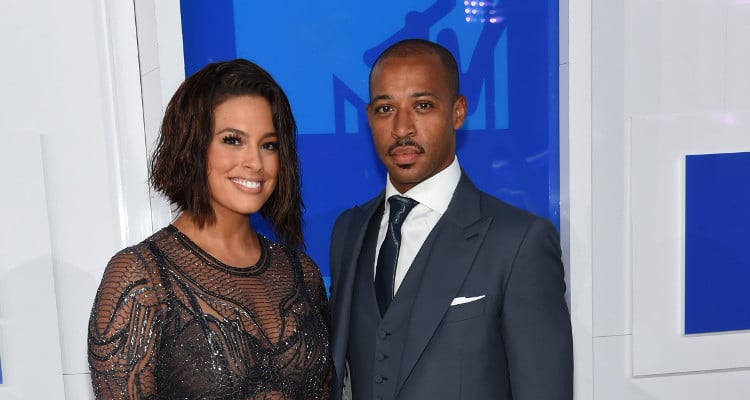 Ashley Graham is nothing if not outspoken! While breaking age-old conventions in the fashion industry, she has also been candid about her personal life—right from experiencing sexual harassment to her inter-racial marriage. Justin Ervin is the lucky guy who gets to call himself Ashley Graham’s husband, workout partner, and soulmate.

Groundbreaking model, Ashley Graham has always been candid about her body image and her hope to serve as a role model for other women. But behind the plus-size beauty is one very strong man. Some time ago, she shared how her family had to come to terms with her inter-racial marriage to him. Justin Ervin has always been by the model’s side and has supported her through all her endeavors. Recently, they celebrated eight years of wedded bliss together with a cute Instagram post. Could they get any more amazing? They totally can. Our Justin Ervin wiki proves it.

He’s a Filmmaker and Cinematographer

Born on January 1, Justin Ervin calls Atlanta, Georgia his “natural habitat” even though his work is mostly based in L.A. and New York. Though he stays a step behind the spotlight on Ashley Graham, he’s pretty accomplished behind the camera lens.

Since then, he’s been building a resume as a cinematographer and filmmaker and he’s well on his way to making a name for himself in the business.

Ervin’s first documentary, As in the Mirror, followed the lives of Senegalese merchants in Florence and was filmed in the Italian city. He went on to make his first feature-length and critically acclaimed documentary, Elephant in the Room in 2012. The documentary was featured in several film festivals.

Ervin worked with the crew on the set of Paranormal State in 2008. His recent cinematographic works include short films like Peach Fuzz and Essence Black Girl Magic: A’Dorian Thomas.

He’s also a talented artist and photographer, occasionally taking pictures of his wife (or contributing to them), like in Graham’s insane Maxim nude spread! In 2018, he directed Ashley’s Pantene commercial.

Ervin has even grown his client list which now boasts some pretty big names like Netflix, Conde Nast, Vogue, Guess, CNN, and Swimsuits for All, where Ashley Graham has her own collection. He’s worked on more documentaries that are coming in 2018.

He’s also a talented artist with some gorgeous sketches. Though it appears he hasn’t been sketching for a while now.

He Met Graham at Church

Faith plays a big part in both Ervin and Graham’s lives. After a string of bad relationships, Graham wasn’t looking for another relationship. Instead, she was focused on volunteering at her church in New York.

Fate had other plans, because that was where she met her future husband! She had volunteered to stand in the elevator, pass out candy, and press the button for the eighth floor. At that time, Justin Ervin walked in with a friend.

Graham recounts in her book that she overheard one of the guys nudge the other and say, “If you don’t talk to her, I will!” When the elevator arrived at the floor, Ervin’s friend got off while he stayed on.

Ashley didn’t think Justin was her type at first. Nonetheless, he stayed on the elevator and struck up a conversation with her. The more he spoke, the more he grew on her and she agreed to go out for a coffee with him.

On their coffee date, Graham was most shocked to see that when the bill arrived, Ervin put his money down for half of it and expected her to pay the rest. She thought he didn’t want another date, but he kept in contact with her and would ask her out occasionally.

Ervin explained to Ashley that he would pay for dinner the next time they went on a date. He admitted that he does well for himself and has had “model” types of women use him for his money. So, he wasn’t going to date someone who only wanted him for that reason.

That, Graham described, was her first experience of how to really “communicate with a man.” He intrigued her the more she got to know him, even dubbing him “weird” in a way that instantly sparked her interest.

His Special Proposal to Graham

After four months of getting to know each other, Ervin asked her to be his girlfriend. They were engaged after only a year of dating and married in August 2010, when Graham was 22.

It’s established that Graham doesn’t do conventional. So, of course, Ervin got her a unique engagement ring that “fit [her] to a T.”

“I didn’t want the princess-cut platinum like a lot of women have,” Graham said about her unique ring.

Even his proposal was one-of-a-kind! During the beginning of their relationship, the couple began recording a series of video diaries called the Justin and Ashley Show on their web cam.

During Ervin’s proposal, Graham thought they were going to film another video diary when he reached into his pocket and pulled out a ring! He recorded that sweet proposal on their video diary—and it’s every bit of adorable!

They’ve Been Married for Eight Years

On August 14, Graham and Ervin celebrated their eighth wedding anniversary together with throwback photos on Instagram. What’s an anniversary these days without gushing about your S.O. on social media, right? Check out the adorable post of the two below!

What’s better? They both share the same strong beliefs. Abstinence before marriage was important to Ervin’s beliefs and Graham didn’t want to follow the toxic patterns of her previous relationships. So, they decided to wait until marriage to get intimate. Graham admitted that too many times in the past, she would sleep with a guy she was dating, only to give it up and have him never call her again.

They Waited Until Marriage!

After they married Graham revealed a little TMI when she spoke about their wedding night!

“There was already this sexual tension, this roaringness [sic]. We had already established such a friendship that we had the two combine. Which, in my mind, just made magic, because now not only am I sleeping with someone that I trust and I love, but I know that he wants me. He affirms me all the time and lets me know how sexy and beautiful I am,” Graham said.

With Graham working in New York and Ervin living in L.A., the couple continue to make their long-distance marriage work. The America’s Next Top Model judge says she can’t go too long without seeing him, so they often make time to spend with each other. 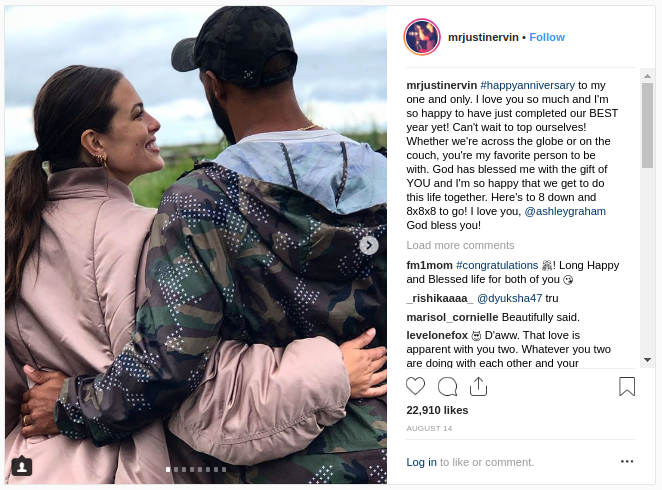 He Struggled to Be Accepted by Her Family

The 29-year-old model released her book, A New Model: What Confidence, Beauty, and Power Really Look Like, where she talks about various things, including her marriage to Ervin and how their love story began. She doesn’t mince words when she speaks about how her family struggled to accept her decision to marry Ervin, a black man.

She explains that she didn’t grow up around many black people in Nebraska, and she didn’t tell her grandparents that the man she was going to introduce to them was black.

“I naively hoped everyone would be color-blind —which is not what happened. When my grandparents met Justin, my grandmother was cordial but cold.

She greeted him and immediately walked away. When it came time for them to leave, my grandparents didn’t even acknowledge him. Instead my grandmother looked me in the eye, with Justin standing behind me, and said, ‘Tell that guy I said goodbye,’” she wrote in her book, adding that she didn’t expect her wonderful grandma to be “so hurtful and so racist.”

After the visit, Ervin told her, “Racism is never surprising but always disappointing.” Graham wrote that the violent stereotype about Black men in the media and her family’s lack of exposure made her grandmother misunderstand Ervin.

But Justin Ervin eventually got Ashley Graham’s grandmother to warm up to him all on his own. All it took was a phone call on her 60th wedding anniversary.

Graham said he prefers to call someone rather than text them on anniversaries, since those are always a big deal to him. After that conversation, her grandmother called Graham’s mom to tell gush at what he’d done. “And from then on out, she loved him. Loved him,” explained Graham. 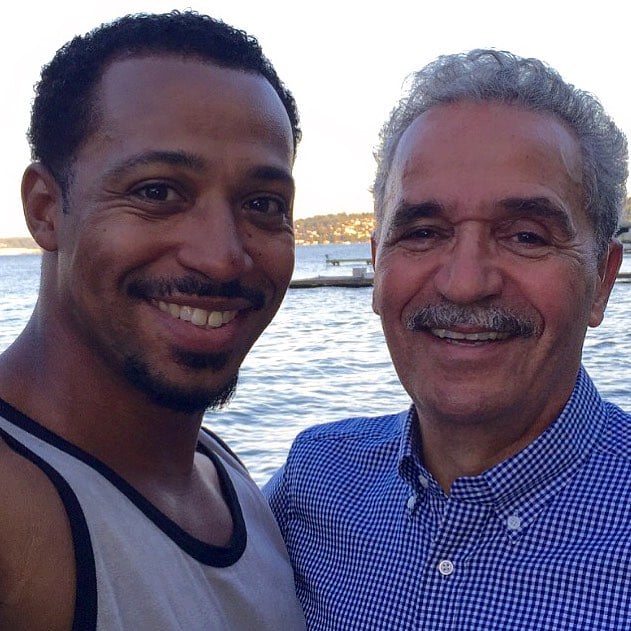 Ervin’s family is based in Pennsylvania. His father, Louis Ervin, was a house parent at a local high school. His mother, Katie Griffy Ervin, appears to adore Ashley on social media. He also has a sister named Kia and brother named Louis. 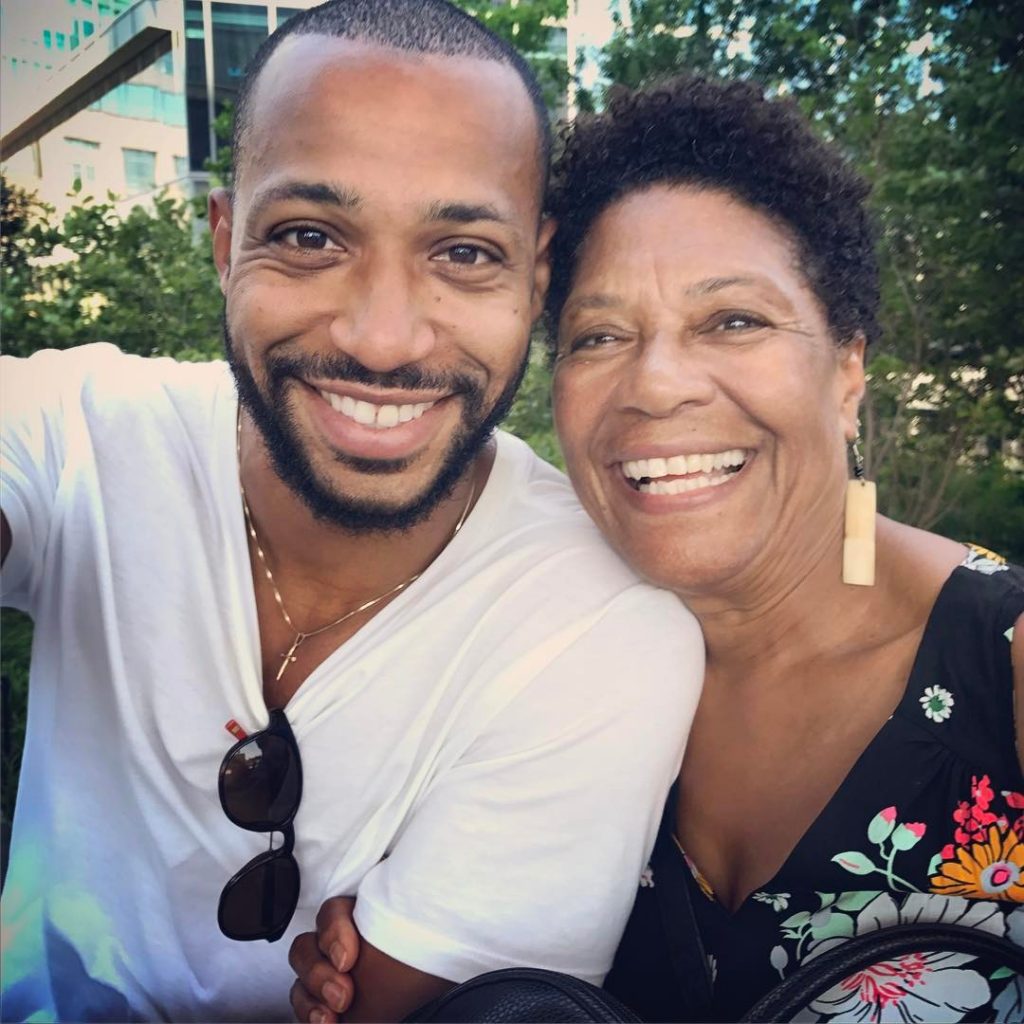