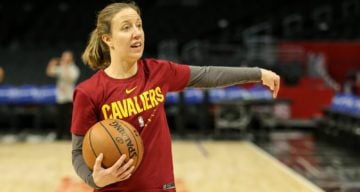 Lindsay Gottlieb, the former Cleveland Cavaliers assistant coach, is now the new head coach of USC’s women’s basketball team. While the winning coach is a topic in the basketball Twitterverse, there’s also a certain query floating around the Internet, too. Social media users ask if Lindsay Gottlieb is related to sports analyst Doug Gottlieb. The former basketball player has occasionally given his piece on Lindsay Gottlieb’s hiring. But are they family? We reveal their connection here.

Lindsay Gottlieb and Doug Gottlieb Are Not Related

Lindsay Gottlieb was born in New York to a family of lawyers. She has two sisters and a brother, but none of them is Doug Gottlieb.

Wisconsin native Doug Gottlieb has a brother and a sister. There’s no evidence of a filial connection between Lindsay and Doug.

Doug has often mentioned the basketball coach in articles and tweets. He once tweeted that she is his “sister from other parents.”

She my sister from other parents RT @PantherU: How are @GottliebShow @branchwest22 related to @CalCoachG ?

In some articles, penned by Doug or other writers, it’s specified that Doug and Lindsay are not related. Their similarities end at the common last name and basketball.