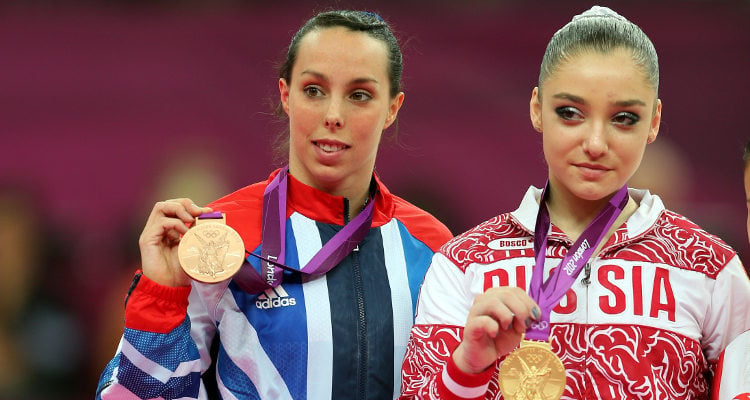 Aliya Mustafina may be only 5’4″, but that hasn’t stopped her from running the show when it comes to gymnastics. She has earned a reputation for her poker face, especially right before she goes on to perform her magic on the uneven bars. Because she maintains such a straight face during her performances, she came to be known as a diva, but simply prefers to stay in the zone. Perhaps Mustafina has noticed this as well, since she’s begun smiling slightly and isn’t so serious anymore.

#4 She has Faced Several Injuries in the Past

Like all athletes, Mustafina has had her fair share of injuries, including knee surgery. The most prominent injury was when she tore her ACL (anterior cruciate ligament) while landing the Yurchenko flip, in 2011. In 2014, she was able to compete in only two events at the European Women’s Artistic Gymnastics Championships, after hurting her ankle. Mustafina even had a back injury that prevented her from competing at the World Gymnastics Championships, in 2015. However, none of her injuries have hindered her spirit and each time she has risen tougher than before.

For all her fans wondering whether Mustafina is blessed with superpowers, we’ll have you know that her father Farhat Mustafin was an Olympian, as well, so understandably, athleticism runs in the family. He won the bronze medal at the 1976 Montreal Olympics for Greco-Roman wrestling. Aliya’s younger sister, Nailya, is also a gymnast on the junior national team, while her mother, Yelena Mustafina, is a physics teacher.

In the midst of the huge Russian state-sponsored doping scandal, many Russian athletes weren’t cleared to compete at the 2016 Rio Olympics, including Mustafina. Thankfully, the gymnast was given the green light only one day before the opening ceremonies. The 21-year-old powerhouse is a fan of Nastia Liukin from the U.S., and has named her as a role model for her graceful uneven bars and balance beam routines. Liukin is the 2008 Olympic individual all-around champion.

#1 Boyfriend and Net Worth

Mustafina has captivated the hearts of Olympic viewers with her grace and poise. Not to mention her dark piercing eyes, and fierce good looks. So, naturally, her fans are wondering whether she has a boyfriend. We’re sorry folks, but she does! Although she doesn’t disclose his name, he is known as Pashka. He gifted her a teddy bear and she put all her Olympic medals around its neck. Mustafina’s net worth is currently $250,000, and she earns $50,000 every year as of 2016.