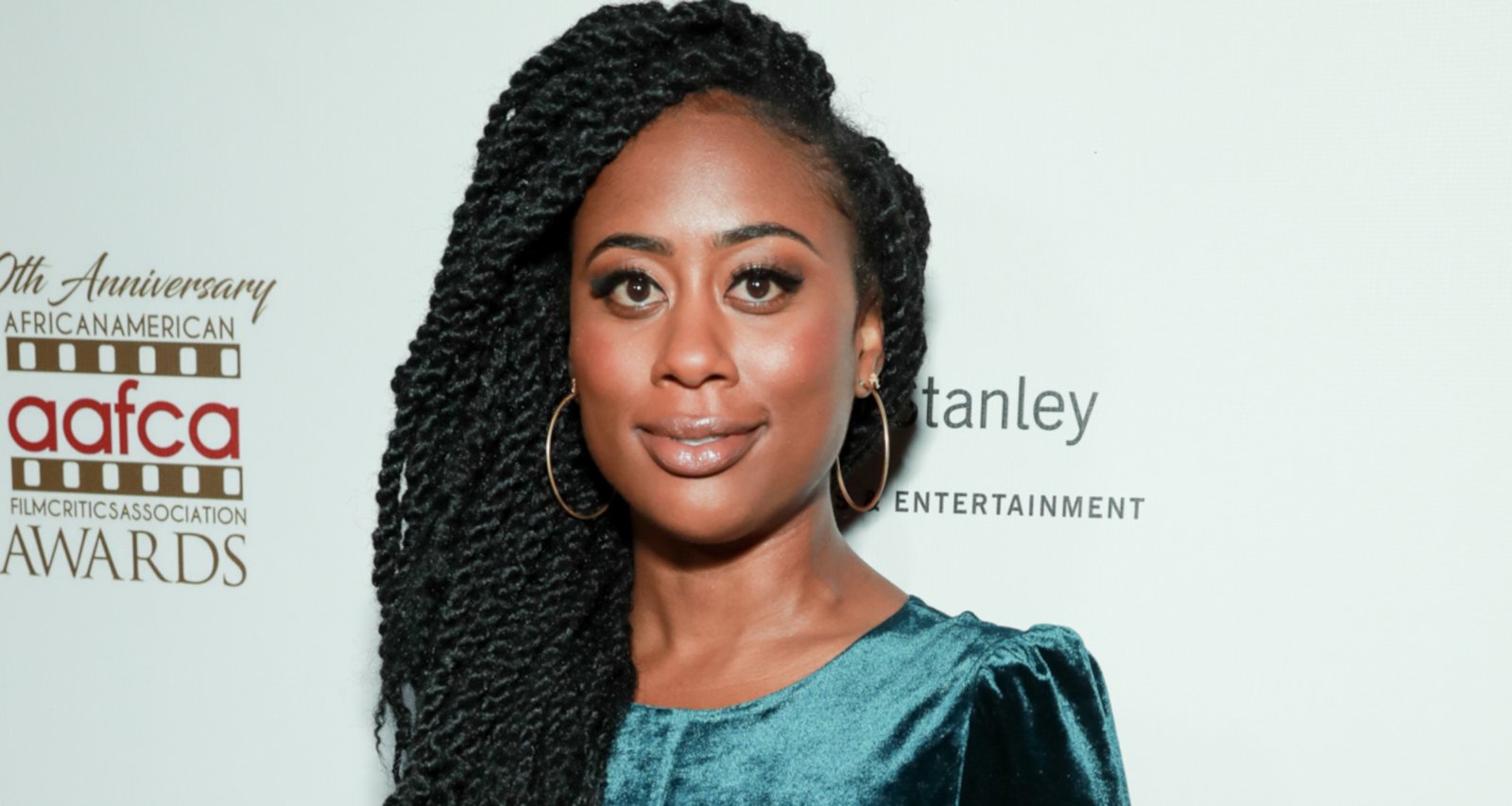 If you’re hooked on Freeform’s Good Trouble like most of us, you’ve heard of Zuri Adele. The groundbreaking actress portrays Malika Williams, a Black Lives Matter activist, and takes on the hard-hitting topics in The Fosters spinoff. The woman behind Malika is equally inspiring, as you’ll see in our Zuri Adele wiki.

Zuri Adele Is from Boston and Lived in California

Zuri Adele Ray-Alladice was reportedly born on April 10, 1990 and is a native of Boston, Massachusetts. She grew up in California where she attended Gunn High School in Palo Alto.

An exceptional student, Zuri was one of three winners of the Gunn High School 2008 Faculty Cup when she graduated that year. MC Hammer even handed out the diplomas at her graduation!

She later attended Spelman College in Atlanta, Georgia, where she acquired her BA in drama. She also spent a year studying drama in London at the British American Drama Academy. She would return to California to pursue her MFA in acting from UCLA.

He has performed all over the world and calls Brooklyn his home. According to Adele, Alladice is a very active persona who, besides performing, also bikes all over Brooklyn and teaches youth.

However, Alladice’s outgoing lifestyle has slowed down on account of his sickle cell anemia, a severe disease of the blood cells. In a heartbreaking December 2018 post, Adele revealed that her father was admitted to a hospital due to complications from the disease days before on Christmas Eve. She was on a flight to Brooklyn to visit him at the time.

This trip home to Brooklyn has blown my mind. As I was flying in on Christmas Eve, my father was re-admitted to the hospital due to Sickle Cell Anemia complications. |His wife and I spent the week by his side. My father can go from traveling the world, performing poetry, biking all over Brooklyn, and teaching youth, to completely losing control of his body and mind, experiencing unimaginable (an understatement) physical pain at any given moment. This has been the case all his life. Sickle Cell Anemia deserves so much more awareness and research, and every being deserves free access to superb Health Care. I truly admire anyone living with this dis-ease. |This week, we experienced an overflow of love and clarity. My friends and family held me, danced with me, prayed with me, and truly lifted my perspective. Thank you all so much. No matter what it looks like, Love has the final say. Stay for the miracle. And so it is.

She called for more awareness about the disease and free access to healthcare in the post. She also described how the family came together to support her father during the difficult time.

But this is not the end for Alladice. The performance poet is still doing what he loves and has an upcoming show on May 5, 2019.

Adele’s mother, Elaine Ray, is an award-winning journalist and writer. During her illustrious career, Ray was a writer and editor for Essence and The Boston Globe. She also was a communications leader at Stanford University.

After winning awards for her journalistic work and short stories, Ray went on to pursue her MFA in creative writing at the Iowa Writers’ Workshop.

This is my Mother. At 64 years young, she is slaying in her first year as a Creative Writing MFA at @theiowawriterswksp. She served as the Director of Communications at @stanford University, Editor at the @bostonglobe, traveled the world as a writer for @essence, and did much more in between, all while being a fierce and supportive mother, daughter, sister, aunt, friend, partner..the list goes on. I surprised her with some glam for the @goodtrouble premier on Tuesday and she was glowing even more than usual. She had her makeup done for the first time since 1986, thanks to the incredible @veronicadeandrea, and had her crown nurtured and magnified by @thelocdarling. These women have such a gift of revealing our inner beauty to ourselves and to the world, and @texturemanagement is making it possible for more of us to see ourselves as Love sees us, and to pour into the world from that place. What a powerful purpose. Elaine Ray, one of my greatest assignments is being your daughter! Photo by the amazing @veronicadeandrea.

Ray also blogs about her family, which gives us a lot of insight into Zuri. According to one of Ray’s posts, Adele has had a knack for performing since she was child.

According to Elaine Ray, their family is filled with artists of various talents and Adele has shown acting chops since she was at least three years old. Besides being trained in the art of drama, Zuri Adele has worked as an acting instructor at the Oprah Winfrey Leadership Academy for Girls in South Africa as well as UCLA.

She started out in theater, bagging the lead role several times during her time at BADA, Spelman, and UCLA. She would go on to work professionally in regional theater as well as appear in commercials for Krogers and AT&T.

Adele ventured into acting in front of a camera and won critical acclaim for her work in short films like The Social Worker (2014). But her start in TV was slow.

She worked on a couple of TV pilots, was the lead in the TV movie Plenty, and had a guest role in the CBS series Under the Dome. Adele’s resume reveals she hasn’t had many jobs over the years, however.

In several Instagram posts, she speaks about going through a difficult few years. She mentioned in one post that she took a gamble traveling from Georgia to California to pursue her MFA.

Five years ago, I packed everything I could into my car and drove from Atlanta to LA to pursue my MFA in Acting at @ucla_tft. My boyfriend and I were driving together and we broke up in Phoenix (😱), and I experienced depression, fear, and overwhelm, layered under the new demands of Grad School. @iamtambourella opened her home to us and helped me find a home of my own. I dove into the most intense training, grew, stretched, stumbled, rose, vibrated high, vibrated low, healed, vibrated high again. I learned about love, created scholarships, taught acting, taught yoga, travelled, performed with incredible artists, struggled, nannied, worked part-time as a receptionist, led voice workshops, questioned everything, ran out of food stamps, fell out, rose back up, learned about friendship, learned more about heartbreak, learned about boundaries, shed my ego, and discovered that all I ever had to do was keep going, keep living, keep learning, keep shining, keep praying, keep trusting, and keep leaping. I am so proud of you, Z. What a wild ride, with so much more to come. Happy Five years, Queen. And So It Is. Photo taken on September 9th, 2013 by @iamthomasramseurking.

During the road trip to UCLA with her boyfriend, the pair broke up in Phoenix, Arizona. That, with the pressure of her studies, overwhelmed her with several emotions. One of her closest friends, Tammy Warren, helped her through the difficult period.

Adele overcame her low point, and in 2018, she was cast in The Fosters spinoff, Good Trouble, which premiered in January 2019. It’s her first role as a series regular on a sold show and her winning portrayal of Black Lives Matter activist Malika is an inspiring representation of women of color on TV.

The show is tackling tough topics—from LGBTQ issues to discussing racial profiling. Through Malika, the show has explored the debate on privilege, representation of minorities in media, and racial bias in dating.

And Malika is not that different from the woman who portrays her. In fact, Adele also raises several issues on her social profiles.

“Malika and I would be best friends,” Zuri gushed about her character. “She is bold and self-expressive. She speaks up for herself and is independent. I’m very independent, too. We have that in common. She really lit a fire under me to speak up for myself and trust that my life is absolutely as it’s supposed to be.”

She Identifies with the LGBTQ+ Community

Good Trouble, like its parent show, has been remarkable in increasing LGBTQ visibility. The show is getting a lot of attention for Tommy Martinez’s bisexual character, Gael.

Malika does not identify with the LGBTQ community but embraces the diverse personalities of her fellow residents of The Coterie, the communal living space Foster sisters Callie and Mariana moved to.

Unlike Malika, though, Zuri Adele is a proud bisexual, even captioning #fluidAF in a recent empowering Instagram post. She revealed that Good Trouble inspired her to be her true self while portraying Malika.

“This is a great time [in TV], especially with Good Trouble. … We’re putting a bisexual character [Gael] on television who is multidimensional, and I think it’s a great time for a bisexual actor like myself to also represent for the community,” Adele said. “The show is holding [the characters], like the actors, also accountable to live authentically as who we are in our real life.”

🌈. Fluidity is a superpower. It’s not a “flowery word for ‘non-commitment’.” It’s a fearless (and often terrifying) personal self-commitment to UNCONDITIONAL Love. #fluidAF. Photo by @devandmarcus.