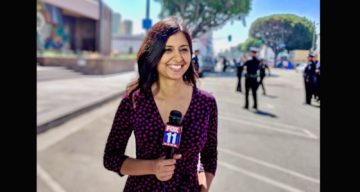 Zohreen Shah is an ABC News correspondent who gained visibility while she followed Kamala Harris on the campaign trail. But she is best known for bringing attention to the South Asian diaspora she grew up in here in the United States. Shah is one of the most talented journalists in the country, and her career is only on an upward trajectory. This Zohreen Shah wiki reveals more about the rising journalist.

Born Zohreen Adamjee on June 2, 1984, she is one of two daughters born to Sameena Adamjee and her husband. Shah’s parents are from Pakistan, where she and her sister were born.

The Adamjee family moved to the United States and settled in California, where Zohreen grew up. Sameena is a case manager at L.A.’s Providence St. Joseph Health.

Zohreen always demonstrated a sense of pride in her South Asian roots and Pakistani-American upbringing. Her resume also boasts of her fluency in Spanish, Urdu, and Gujarati.

Not only does Zohreen post frequently on social media about South Asian-Americans, she is also a member of the South Asian Journalists Association (SAJA). She is the only Pakistani news reporter in California, and it has come in handy in her career. For instance, she got a job translating interviews shot in Pakistan while she was studying in New York.

Zohreen Adamjee earned her B.A. in Mass Communication from UCLA and later moved to New York where she attended the Columbia Graduate School of Journalism. She graduated in 2011 with an M.S. in Broadcast Journalism.

Before she went to New York, Zohreen earned valuable experience as a contributor to the Los Angeles Times. Then in 2011, she was selected from a drove of competitive journalism graduates to be a master’s fellow at CNN L.A.

From 2012 to 2014, she worked at Sacramento’s KTXL’s Fox40 News. She started as a social media anchor and was later promoted to multimedia journalist. She then moved on to work as a freelance journalist for San Diego’s Fox5 News for almost two years.

Zohreen is best known for her tenure at KTTV’s Fox 11 from 2016 to 2019. After joining ABC News in 2019, she set right to work as an embed in Kamala Harris’ presidential campaign.

In 2020, she was promoted to multiplatform reporter in L.A. She has also worked with GMA and ABC World News.

On August 7, 2017, Zohreen Adamjee married Kishi Shah. Zohreen’s husband is of Indian descent, and their wedding included traditions from both their cultures.

Zohreen and Kishi Shah currently reside in California. Very little is known about Kishi, but he does often feature on Zohreen’s social media.