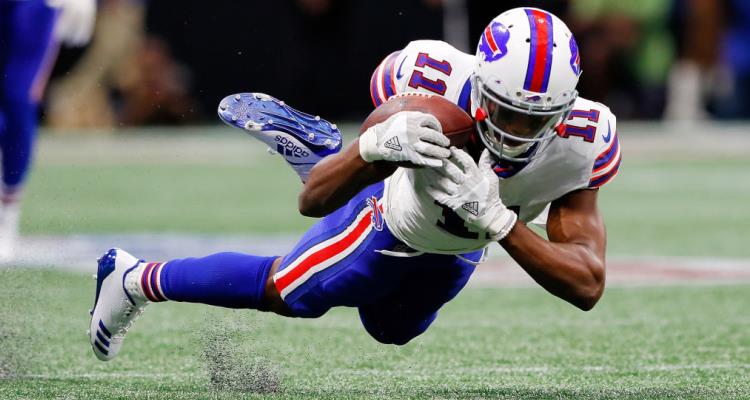 In bizarre news, a video of Buffalo Bills’ Zay Jones was released, in which the wide receiver is seen naked and fighting with his brother in the halls of a downtown L.A. apartment! The video shows snippets of Jones’ brother Caleb trying to calm him down and get the situation under control, but it wasn’t so easy. Here’s what happened!

From a naked Zay Jones to bloodied walls of a penthouse apartment, the strange happenings in a video that was released yesterday ended in the arrest of the Buffalo Bills star. Jones made it to the headlines again, but this time it was not for the right reasons. With Zay Jones back in the news, many are reminiscent of the “Zay Jones challenge.”

Read on to know more about the story on Zay Jones’ incident and to learn what exactly the “Zay Jones Challenge” is! FYI—they have nothing to do with one another!

What Happened in the Zay Jones Video?

Jones was arrested for vandalism and felony after he reportedly got into a fight with his brother in a Los Angeles penthouse corridor.

TMZ Sports acquired the video in which Jones and his brother, Caleb Jones, were seen fighting.

Jones is buck naked while brawling with his brother and can be heard screaming, “I’m going to fight for Jesus,” the website reported. His brother is visible trying to calm him down but to no avail.

Here’s the video, but be warned, as it contains graphic content:

In a twist, it was reported that the Bills’ receiver brother stopped by him from jumping off the 30th floor of a building in Los Angeles!

The cops were called and were told that somebody had shattered a glass window and doors in an apartment building close to the Staples Stadium.

Also Read: Where Is Inky Johnson Now after His Career-Ending Injury?

A naked Jones allegedly freed himself from his brother’s clutches, ziplined towards his girlfriend’s apartment, ran back outside to the public area, and then smashed through the glass door with his foot.

The walls of the corridor can be seen smeared in blood. And a trail of blood was also found on the floor.

Jones allegedly tried to jump through the cracked hole in the window. However, he was restrained by his brother until the officials arrived to arrest the player.

Is Zay Jones at the Hospital?

After looking at all that blood and gore, fans are now concerned about Zay Jones’ health, both mentally and physically.

The NFL player was taken to a medical facility at the L.A. County Jail after he was arrested. The gravity of his condition is still unknown.

Jones has probably sustained deep cuts from the glass he smashed with his legs and hands. However, the exact nature of his injuries are yet to be disclosed.

Now, people are stumped as to why Jones went berserk. But why did Jones behave so erratically in the first place?

The NFL released a statement about the issue, which read, “We are aware of the incident involving Zay Jones. We are still in the process of gathering more information on the matter. At this point, we will have no further comment.”

What Is the Zay Jones Challenge?

Fans on social media are praying for the good health of their football idol. The ridiculous thing about the act was that it was so unexpected! So, was Jones under the influence? No one knows yet for sure.

The footballer is a fun-loving man with a witty sense of humor and a hidden talent nobody knew about until his game against the Chiefs last year.

Zay Jones went viral when he appeared to defy gravity after almost making a touchdown catch for the Bills last year. It was the way he got up from the ground after scoring a touchdown; it was very Michael Jackson-like and baffled the minds of many as to how he did it. He almost seemed to float when he got up, and it appeared like a miracle! And after the video went viral, many people began trying it out themselves, including his teammates. It wasn’t easy!

Jones was always seen as a positive player, with a great attitude on the field. Fans are concerned about his mental health after he was seen behaving so erratically in the recent video and arrest.

We hope Zay Jones is alright and can come back to the field with good health!

Here’s the clip of the video that went viral and resulted in the Zay Jones challenge. Think you can complete the challenge and get back up the way Jones did? (Even his teammates couldn’t master it!) Try it out for yourself!