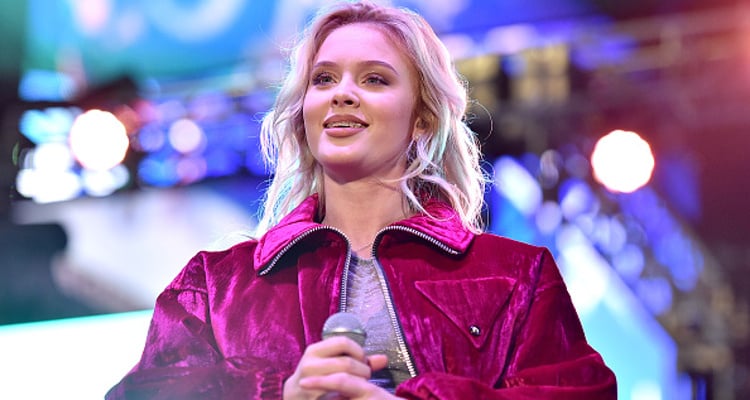 Sweden’s latest export, Zara Larsson, is the new breakthrough artist who’s going to release an album next year. Larsson is a 19-year-old popstar who’s on her way to gaining international fame.

The music scene is going to heat up in 2017! Not only can we expect new music from Fergie, Train, Iggy Azalea, and Major Lazer, Swedish teen popstar Zara Larsson will also release her first U.S. album next year. Larsson turned 19 on December 19, and is enjoying international success. Her name to fame was as a 10-year-old who won Talang, the Swedish version of America’s Got Talent. If you’re eager to know more about Zara Larsson’s upcoming songs in 2017, we’ve got all that and more right here.

Zara Larsson Announced Her New Album will be out in 2017

Larsson released three singles “Uncover,” “Never Forget You,” “Lush Life,” and “Ain’t My Life” in 2016, all of which are part of her upcoming unnamed album. In July, Larsson had announced that her album is complete and will be released soon.

Sources claimed that the album was due in September 2016, and Larsson apparently retweeted an article confirming that. September came and went, and there was no album in sight. All we were told is that there will be 10 songs on the album, including the recently released singles. The album art and title is still to be determined.

However, at Liverpool event in November, the Swedish singer assured fans that we could kick off 2017 with her new album, “It’s coming in January hopefully. It is finished, but I feel like you could basically keep on doing it forever. But now I’m just like, ‘It’s finished, it’s done – I’m happy with all the records on it.’ I actually feel like I have too many good songs. It was really hard to pick out the final cuts.”

It looks like we’ll have to stick it out a little longer before we can listen to Zara Larsson’s first international debut album. She’s already a chart-topper in her home country, with her single “Uncover” topping charts in Sweden, Denmark, and Norway, and was certified platinum by Universal Music Sweden. Her chart-topping LP 1 was released two years ago, and thrust her to fame in the Swedish pop scene.

Larsson auditioned for the Swedish version of AGT called Talang in 2008 when she was 10 years old. The talented young girl belted out tunes by Celine Dion and Whitney Houston proving to be a pint-sized vocal powerhouse. She won the competition and was slated to make a career in music. Larsson chose to finish school when her record deals were not as expected. Eight years later, she signed with Epic Records and is now an up and coming hitmaker.

Larsson dropped a trio of singles in her international debut. While “Uncover” became a hit in the U.S., “Never Forget You” was her breakout single in the U.S. and was certified platinum twice. “Lush Life” performed better overseas earning top spot in Sweden and third in the United Kingdom.

Considering her appeal both in the U.S., Sweden, and the U.K., Larsson is planning her international debut album with her latest single “Ain’t My Life.” About her album, Larsson told, Digital Spy “We’ll see how things turn out. It depends on how well ‘Ain’t My Fault’ flies. If it doesn’t, we’ll put out a new song, but if it does, we’ll stick with that for a bit longer. Hopefully, it will keep climbing in America, and we might put out another single here in Europe. So we’ll see.”

While we’ve already got a taste of what Larsson’s new album has in store for us, it only comes down to the people collaborating with the rising star on her 2017 album. “I’ve been in the studio with a lot of different producers,” Larsson explained, “I’ve got WizKid on the album. I’ve got Ty Dolla $ign, and I love him so much. Max Martin’s crew, MXM team, will also feature on the album, as well as, StarGate and The Monsters, and Strangerz.”

We’ve heard the singles, and we know Zara Larsson’s album is coming out in January 2017. It’s just a little wait, but we’re certainly excited.