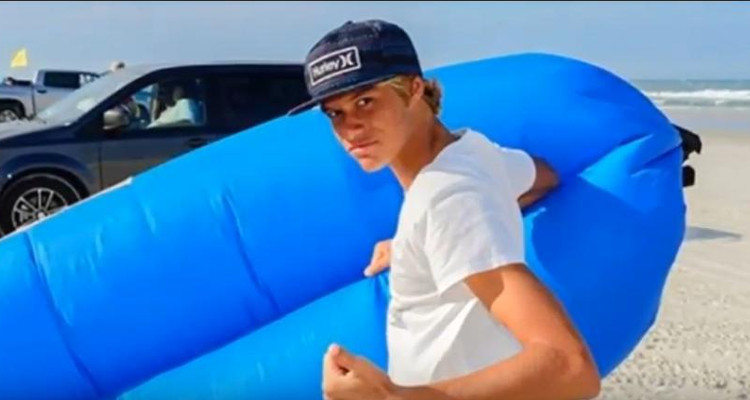 A young teen by the name of Zander Venezia tragically passed away while surfing in Box by Box in Barbados which, among the rest of the Caribbean islands, is currently grappling with Hurricane Irma. What is Zander Venezia’s cause of death? Find out about this one life gone too soon in Zander Venezia’s wiki.

Zander Venezia may have been only 16 years old, but he had a talent for riding the waves. He began surfing at the age of five and became an established professional surfer from Bridgetown, Barbados who had a bright future ahead of him. He won a series of surfing competitions in his career, including the $250 top prize at Rip Curl Grom Search in the Outer Banks in North Carolina this August, and the National Scholastic Surfing Association regional championships back in April.

The U-12 Champion was set to ride the waves all the way to the 2020 Olympics. Lauded as one of the most promising surfers to come out of Barbados, everyone knew he’d make the national team. He was preparing to compete in the national finals at Steamer Lane in October. Unfortunately, this Barbadian teen’s surfing career was cut short.

#2. He Died Doing What He Loved

Venezia was one of the many pros who were eager to take advantage of the big swells caused by the dreaded Hurricane Irma. He was surfing the breaks at a place called Box by Box, a shallow reef near his home on the island’s east side. He was there with surfers Nathan Florence, Dylan Graves, Balaram Stack, and Asher Nolan who were going to ride the Hurricane Irma swells on Tuesday (September 5). Venezia told Graves “it was the best wave of his life” after testing it out.

While surfing the giant waves, he was caught by a closeout set sending him to the shallow, rocky bottom of the reef. According to some eyewitnesses, he hit his head on the reef, was knocked unconscious and drowned. Florence found his limp and bleeding body being rammed by the waves and shouted for help. The group tried to save him by bringing him to shore with great difficulty.

Super happy to take the win at the @ripcurl_usa Grom Search in Outer Banks. Thanks to @mr_mattmyers for putting on a great event as usual.

“Box by Box is a tough place to get in and out of, even if you have the ability. There’s lots of big rocks around, and some stick out of the water,” said Alex Burke, a pro-turned-instructor whose sons were Venezia’s friends. Those with the teen tried to give him CPR until the paramedics arrived. The entire ride to the hospital, they were trying to revive him. “But once they got him to the hospital, Zander was breathing, but not responsive. From the time Nathan got to him in the water to when they arrived at the hospital, it was about 75 minutes of nonstop CPR,” Burke narrated.

Venezia passed away at the hospital on Tuesday with his parents, Lisa and Louis, and sister, Bella present. Some sources claim he may have broken his neck upon impact with the reef. However, the autopsy report released later said Venezia didn’t suffer any fractures. With his death on Tuesday, Venezia became the first life claimed by the Category 5 Hurricane Irma.

Had a blast in Cocoa Beach for the Ron Jon Pro Jr. I ended up placing 5th in the very challenging conditions. PC: @surfsupwolf

Surfing in the middle of the hurricane is dangerous, but Venezia was by no means an inexperienced surfer. In fact, his skills were well-known among the surfing community. That’s why his death comes as a shock to his peers. Professional surfers have taken to social media to express their grief at the loss of a fellow surfer.

His sister Bella, 19 said her brother “was a positive boy, who always had a smile on his face that was contagious.” She is a student at Sheridan College in Canada and spoke to him last on Sunday (September 3) before she returned to school. She said her family has yet to come to terms with Zander’s death, while she herself is relying on her boyfriend for support. Her parents are staying strong and the entire extended family has banded together to keep Zander’s name alive. Since Zander was much-loved by the surfing community, the family has a strong support system in them.

The Venezia family created the hashtag, #livelikezander for those who knew him to share memories of the vibrant teen. They plan to have a funeral on September 13 followed by a paddle out in Zander’s memory.

I'm going to miss you so much Zander! You had such an amazing session today. Surfed for 4 hours. You were charging and had the happiest smile on your face everytime I saw you. You were a humble, respectful, full of positive energy that every kid should look up too and live the way you did. Gone too soon. My heart is heavy. The Venezia's always treated me like family and it hurts that they have to go through losing someone so special.