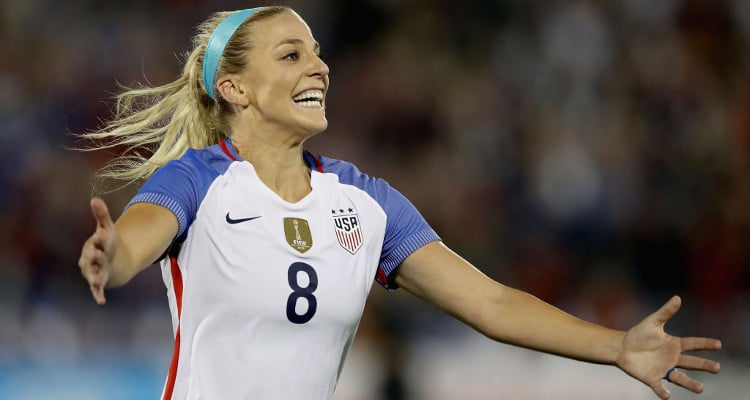 Soccer player Julie Ertz and her team are currently celebrating their victory after defeating team Korea Republic in Cary. N.C. The U.S. Women’s National Team are thrilled with their win. If you want to know more about the team’s midfielder, then take a look at our Julie Ertz wiki.

Born on April 6, 1992, in Mesa, Arizona to David and Kristi Johnson, Julie Ertz’s age is 25. She has an older sister, Melanie, who also joined the Arizona Arsenal Soccer Club, formally known as Gilbert Soccer Club, in 2000. However, to push their limits, the sisters started playing for Sereno Soccer Club in Phoenix. Ertz was very happy with her decision, claiming it was the best she ever made, and staying with the club from 2004 to 2010 in their U-13 through U-19 teams.

While playing for Sereno, Ertz won the state title nine times and was captain of the team. In 2010, she graduated from Dobson High School. Throughout her four years there, she volunteered as a student athletic trainer, but never played for her school team. Additionally, she was a member of the National Honor Society.

Ertz attended Santa Clara University, where she majored in communications. She also joined the school’s women’s soccer team, playing as a midfielder.

Julie Ertz’s Net Worth and Career

Julie Ertz’s net worth has not officially been calculated, but due to her thriving soccer career, it is bound to grow. Her professional career started with the Chicago Red Stars, who picked her in the first round of the 2014 NWSL College Draft. She is also a midfielder for the United States Women’s National Team. Ertz also played in the 2015 FIFA Women’s World Cup and 2016 Summer Olympics.

Happy one month @zachertz ! I wish I could be back in this exact moment. I love you babe thanks for making me the happiest wife. Best day ever!! ?

Zach and Julie Ertz met in 2012. Both were in college, with Zach being a junior at Stanford and Julie a sophomore at Santa Clara. They were at a Stanford baseball game, and it looked like love at first sight for Zach, because the moment he saw Julie in the student section, he decided to go and talk to her.

It was on February 26, 2016, that the couple decided to take their relationship to the next level, getting engaged at the stadium they first met. “Julie has a great personality, a big personality. It’s fun to be around her. She keeps me humble, and she makes fun of me. She laughs at me. She makes me laugh. I could go on for hours about what’s so amazing about her. She’s an amazing cook, which I love. I’m convinced she makes the best tacos in the world. That’s something that people probably don’t know about her.” Zach said, adding, “There are things that I do to get focused that have helped her out, and vice versa. I think it’s going to continue throughout our careers and relationship. If I’m stressed out or something, she’s there to help me out, just like I am for her.”

To take a look at Julie Ertz’ hot pics, then make sure to follow Julie Ertz’s Instagram, which is regularly updated, and even features her tight end husband.