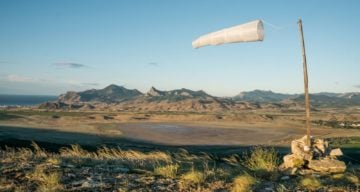 Zach Covey has been bringing the weather forecasts to West Palm Beach for only a few years, but CBS 12 viewers are already attached to this charming meteorologist. Now the weather anchor is moving on to the next step of his career. Zach Covey announced he is leaving WPEC-TV in September 2022. His announcement naturally elicited questions from viewers. They especially want to know where he is going next and if his new job will also take him away from Florida. Here’s what Zach Covey said about leaving CBS 12.

Zach Covey graduated from Florida State University with a BS in Meteorology in 2016. By then, he had already gained broadcasting experience in his home state.

He had a brief meteorology internship at WTXL-TV’s ABC 27 News and was a weather forecaster on WCTV Eyewitness News for less than a year.

Covey’s first job out of college was in Texas, where he was a meteorologist at El Paso’s KFOX 14 Severe Weather Team and CBS 4 Warn Weather Team from 2016 to 2018. He later moved to Myrtle Beach, South Carolina, where he did the morning forecasts on WPDE-TV’s 15 News.

The meteorologist returned to Florida and joined the StormTrac Weather team at WPEC-TV’s CBS 12 in October 2019. He was the hurricane specialist, and West Palm Beach residents also found his forecasts fun and entertaining.

Viewers: “Are you going to have cake on your last day at @CBS12?”

So viewers were naturally dejected when Zach Covey announced he was leaving CBS 12. The weather reporter posted the news on his social media on September 18 that the subsequent week would be his final one at CBS 12.

Covey will be on-air from Wednesday to Friday and through the weekend. His last day at CBS 12 will be Sunday, September 25, at 8:20 a.m. local time.

And he is going out with a bang! Zach Covey will join CBS 12 anchor, Stefany Valderrama, to eat a serving of grasshoppers on the live broadcast on Sunday.

Taste-testing unusual foods may not be a long-term career option for Zach Covey. He hasn’t revealed where he is going but hinted that he would stay in broadcasting. He reportedly won’t be leaving Florida anytime soon.