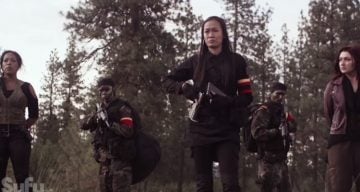 The Zombies are upon us! Z Nation returns to SyFy tonight, September 16, at 8:00 p.m., with a special TV movie. The two-hour premiere for season 3 is set prior to the climax of season 2, and is going to introduce three new characters in the exciting zombie apocolypse comedy. Zombie fans wanting to know which of their favorite characters will be returning and who the new cast members joining the living-dead adventure will be, are in luck. We have all the information you need about the cast of Z Nation season 3.

Earlier this month, SyFy announced three new cast members joining season 3. Nathalie Jongjaroenlarp, Joseph Gatt and Holden Goyette will be seen along with our ragtag group of survivors, though their characters haven’t been specified yet.

Those who remember Thenn Warg from Game of Thrones should be very excited about Joseph Gatt joining the cast.!

11-year-old Holden Goyette is famous for his 2016 movies Broken, Zilla and Zoe, and Out of Darkness.

Nathalie Jongjaroenlarp’s role is unspecified, but she makes a very beautiful zombie apocalypse survivor on the sets of Z Nation!

The rumor mill is also abuzz with speculation that zombie baby, Lucy is going to grow up at a rapid speed, which means a new actress will have to play her role. Season 3 will also have a new villain that Murphy and the group will have to face off against. Show creator, Karl Schaefer described the new villain as the king of all bounty hunters.

At the end of season, Murphy, Roberta, Addy, Doc, 10K and Vasquez had reached the rundown CDC lab. When Murphy is aboard the CDC submarine, the mission is seemingly complete when the rest of the team on shore is attacked by La Reina and Zeros. Meanwhile, Murphy finds something very suspicious about the people aboard the submarine and breaks out, triggering an explosion. Hector (Emilio Riviera) joins our elite Zombie-whacking team and Murphy returns to them with Dr. Merch (Lisa Coronado) and Captain Matheson, after turning them into blends. 10K, who was on the submarine, presumably died when it went up in flames. But who knows! If he can survive a zombie apocalypse, maybe he can survive a burning submarine. Simon Cruller was last seen in season 2 finding a new place to settle with his dog.

In season 3 of Z Nation, Keith Allan reprises his role as Murphy, the former convict and only hope for the survival of the human race. Kellita Smith is back as Roberta Warren, the leader of the survivors group, along with the ‘tough chick’ Addy Carver, played by Anastasia Baranova. Self-educated ‘ER’ fan, Doc was last seen on the season 2 finale and he was fine, so we can count on Rusell Hodgkinson returning this season. Nat Zang’s 10K and DJ Qualls’ Citizen Z had ambiguous endings in season 2, so it remains to be seen if they will return this season.

The two-hour premiere will also take us back in time, showing our favorite protagonists before the zombie apocalypse. So, expect a spotlight on each of the characters and also a special focus on baby Lucy to see whether she grows up human or zombie! Or maybe both?

Most Likely to Survive the Apocalypse. ???? #ZNation pic.twitter.com/5U1Rixzwrz