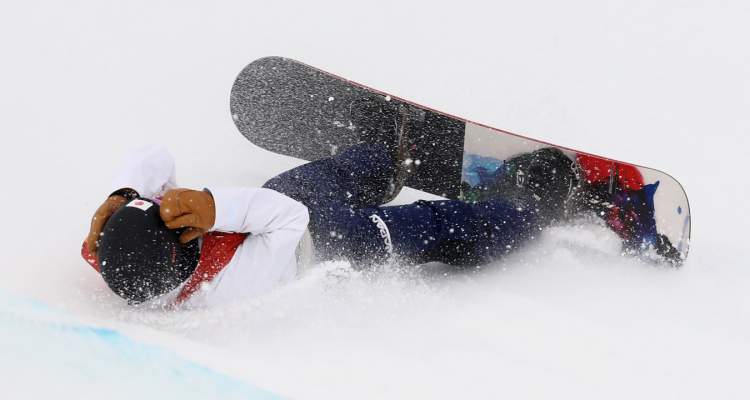 The halfpipe finals at the 2018 Winter Olympics on Tuesday, February 13, took a horrific turn. Japanese snowboarder Yuto Totsuka had a brutal crash that ended with the athlete being carted off the halfpipe on a stretcher.

The men’s halfpipe finals at the 2018 Winter Olympics saw a few accidents, but none so severe as that of Yuto Totsuka, the snowboarder from Japan. The 16-year-old was carted off by medical personnel after he took a violent tumble on the halfpipe. TV commentators described his fall as one of the worst they’ve ever seen in the sport, and Olympic viewers echoed the sentiment online. Here’s an update on the young snowboarder’s injury.

Team USA’s Shaun White won his third Olympic gold medal, but his win is the last thought on Olympic viewers’ minds. Everyone wants to know how Yuto Totsuka is doing after he took a nasty fall at the halfpipe finals.

The teen went too far beyond the edge and lost control of the landing. He hit the lip of the halfpipe and bounced off the decline.

His momentum flipped him upside down in the air and sent him face-first into the slope. Analysts say he fell roughly 35 feet into the bottom and laid prone in the snow seemingly unconscious for too long.

According to reports, people watching the games, including the commentators, were stunned into silence. After what seemed like an eternity, Totsuka finally sat up.

Medical personnel skied down the course to attend to the athlete. He was in obvious pain and discomfort as the paramedics loaded him onto the stretcher.

NBC’s Olympic broadcast cut to commercial at this point. Pictures from the scene show him being carted off the course by paramedics on the stretcher.

This is Totsuka’s first Olympic appearance. A representative for Team Japan stated that his injury is not severe. He complained of pain in his hip and was transported to a hospital for further examination.

Japan’s press officer says Yuto Totsuka has “no big injury”but pain in his hip and was transported to the hospital.

Fans have taken to Twitter to express their concern for the young athlete and are hoping for his speedy recovery.

You can check out the video of Yuto Totsuka’s crash below.