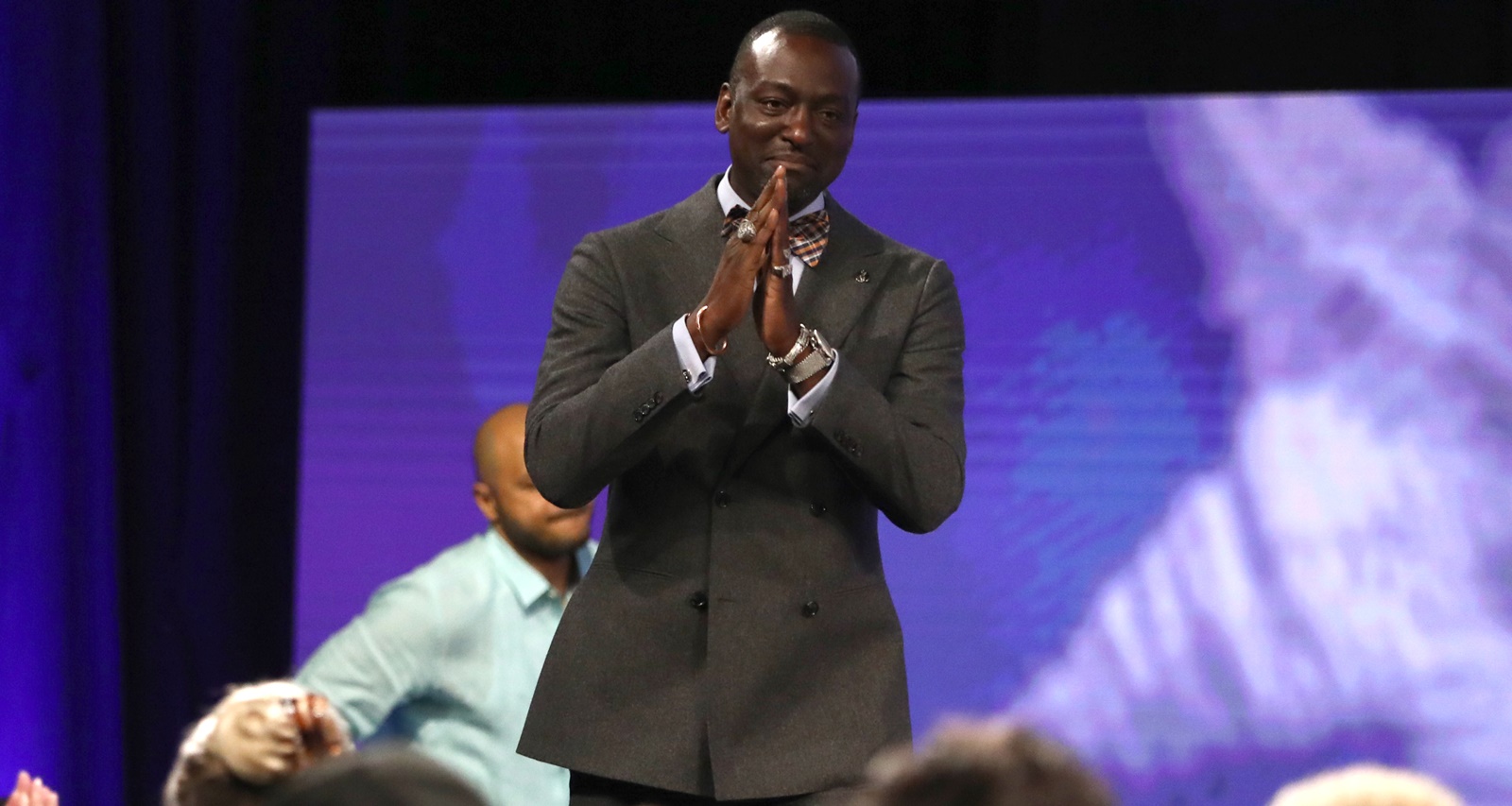 Yusef Salaam onstage at the Netflix "When They See Us" FYSEE Event at Raleigh Studios on June 09, 2019 in Los Angeles, California. (Photo by Handout/Getty Images for Netflix)

Ava DuVernay retold the story of the Central Park Five in the powerful new Netflix series, When They See Us, and has renewed interest in the gross miscarriage of justice the five teens experienced. Yusef Salaam, portrayed by Ethan Herisse and Chris Chalk in the series, was only 15 when he lost his childhood due to wrongful incarceration. Now exonerated, he’s an outspoken voice for criminal justice reform. Our Yusef Salaam wiki delves deeper into his heartbreaking yet triumphant story.

Yusef Salaam was born on February 27, 1974 to Sharonne Salaam. He was one of the Central Park Five, the teens who were convicted in the 1989 Central Park Jogger case where Trisha Meili was brutally raped and assaulted.

First #TBT. On the eve of my 40th (2/27/74) I'm reminded of the favors I've been given: Surah 46. Al-Ahqaf, Ayah 15 وَوَصَّيْنَا الْإِنْسَانَ بِوَالِدَيْهِ إِحْسَانًا ۖ حَمَلَتْهُ أُمُّهُ كُرْهًا وَوَضَعَتْهُ كُرْهًا ۖ وَحَمْلُهُ وَفِصَالُهُ ثَلَاثُونَ شَهْرًا ۚ حَتَّىٰ إِذَا بَلَغَ أَشُدَّهُ وَبَلَغَ أَرْبَعِينَ سَنَةً قَالَ رَبِّ أَوْزِعْنِي أَنْ أَشْكُرَ نِعْمَتَكَ الَّتِي أَنْعَمْتَ عَلَيَّ وَعَلَىٰ وَالِدَيَّ وَأَنْ أَعْمَلَ صَالِحًا تَرْضَاهُ وَأَصْلِحْ لِي فِي ذُرِّيَّتِي ۖ إِنِّي تُبْتُ إِلَيْكَ وَإِنِّي مِنَ الْمُسْلِمِينَ And We have enjoined upon man, to his parents, good treatment. His mother carried him with hardship and gave birth to him with hardship, and his gestation and weaning [period] is thirty months. [He grows] until, when he reaches maturity and reaches [the age of] forty years, he says, "My Lord, enable me to be grateful for Your favor which You have bestowed upon me and upon my parents and to work righteousness of which You will approve and make righteous for me my offspring. Indeed, I have repented to You, and indeed, I am of the Muslims."

But there wouldn’t have been five youths at the heart of the case if it weren’t for a friend supporting another friend. As it turns out, 15-year-olds Yusef Salaam and Antron McCray and 14-year-olds Kevin Richardson and Raymond Santana were initially taken into custody as suspects.

A then-16-year-old Korey Wise accompanied his friend Yusef for support. However, Wise, who suffered from learning and hearing disabilities, was dragged in for questioning, too.

Prosecutors got verbal and videotaped confessions out of the teens who would be collectively dubbed the Central Park Five. These confessions, though rife with inconsistencies, were used as evidence in trials against the kids.

They were convicted of assault and rape and sentenced to five to 10 years in prison. Wise, the oldest of the group, was the only one tried as an adult and received the harshest punishment.

They would be exonerated in 2002, when it was revealed that serial rapist Matias Reyes was the real criminal behind the attack on Meili. The Central Park Five won a settlement of $41.0 million against the city of New York for their wrongful conviction.

But that does little for Yusef, who still feels guilty that he inadvertently got Wise involved in the ordeal. When he saw what Wise went through on-screen in When They See Us, he was especially heartbroken.

“I immediately realized that we were in paradise compared to the hell that Wise was in. His was unrelenting. I went to jail and I was able to get a college degree. He never got an opportunity to breathe, to meditate, to just say, ‘Phew, man, that was really crazy today. Let me kick my feet up a little bit and read this magazine,’” Yusef said.

He went on to say, “That reality—that pain, I think, is a better word—is knowing that he came because of me. Offering an ‘I’m sorry’ doesn’t seem adequate. And I’ve been able to say that to him, but I also realized that that’s not adequate enough to know what he went through, or that he could have been killed in prison. He almost was. It’s not enough. And I have a direct role to play in that.”

Wise, though, doesn’t hold it against him. “Yusef—that’s my boy,” he says. “That’s my little childhood brother there. We were just baby boys, we were just trying to be entrepreneurs, having fun being kids. I had him out with me, riding him around, went to a barber shop, little haircut, little touch up. If [someone had told me], ‘You, little [expletive], yo. You stay here, you don’t go with him,’ I wouldn’t have went.”

Salaam’s Age Was a Contentious Issue during Trial

During the 1990 trial, Linda Fairstein claimed Yusef Salaam’s interrogation was cut short when they found out he was under 16 years old. As per the state law, minors under the age of 16 can only be interrogated in the presence of a parent or guardian.

Fairstein, then an assistant district attorney and the chief of the sex crimes prosecution unit in Manhattan, had appointed Elizabeth Lederer to lead the prosecution team against the Central Park Five. She had also successfully weaved a narrative that saw the five teens wrongfully convicted and led to the “wilding” mass hysteria.

Fairstein testified during the trials that she had stopped the interrogation of Yusef when they learned he was younger than 16. At that, Sharonne Salaam had an outburst in the courtroom, calling her a “liar.”

Yusef’s mother and several others testified that her son had been questioned for hours before they learned he was under 16. After her eruption, Sharonne was removed from the courtroom.

But what followed was a tense exchange between Yusef’s attorney, Robert Burns (played by Blair Underwood in When They See Us), and Fairstein, as well as the presiding judge, Thomas Galligan. It happened when Fairstein said in her testimony that parents often claimed their children were minors in a bid to stop the questioning.

Fairstein was apparently smiling when Burns was cross-examining her, which ticked off the defense attorney. Burns also accused Judge Galligan of laughing amid the trial.

Also Read: Asante Blackk Wiki: The Actor Who Plays Teen Kevin Richardson in “When They See Us”

Salaam Testified during the Trial

Burns passionately tried to defend Yusef Salaam and the other kids in the trial. Against the advice of his fellow defense attorneys, he had Salaam take the stand in a bid to prove that the confessions were coerced out of the minors. It was a major risk to call any of the teens to testify as they could be withered by the prosecutors in cross-examination.

Salaam came to the stand carrying the Koran and a book titled 99 Names of Allah. His was the only confession that was not videotaped. Detectives said that a New York City Transit Authority transportation pass showed he was 16.

His statement, however, could not be signed when the detectives found he was under 16 years old. Nonetheless, Judge Galligan allowed the unsigned statement to be read by the jury.

During his testimony, Salaam soon revealed that he was questioned by the detectives when he told them he was 16 years old. His revelation contradicted the prosecution’s claims.

Despite the efforts of Burns and the other Central Park Five defense attorneys, Peter Rivera and Mickey Joseph, the teens were convicted of the crime.

Salaam initially served time in the Harlem Village youth facility, before being transferred to Clinton Correctional, an adult maximum security prison, when he was 21.

Salaam Resides in Georgia with His Wife and Kids

In March 1997, he married a woman with whom he had three children, but their union soon ended in divorce. According to Sarah Burns, who authored a book on the Central Park Five, Salaam’s marriage broke down because he rushed into it so soon after he got his freedom.

Salaam has since remarried to Sanovia Guillory, his wife of more than a decade. He is father to a total of 10 children.

Don’t Miss: Jharrel Jerome Wiki: Facts about the Actor Playing Korey Wise on “When They See Us”

Salaam Has a Doctorate and Is a Motivational Speaker

During his trial, it was revealed that Salaam was kicked out of the famous LaGuardia High School for possessing a knife. After his conviction, he turned his tragedy into triumph by pursuing his education while in prison.

The Central Park Five received honorary diplomas from the Bronx Preparatory High School in 2017. Salaam, Richardson, and Santana were present for the ceremony.

Barring Wise, the teens worked towards their GED and post-secondary degrees while in prison. Salaam went on to receive an honorary Doctorate of Humanities from Anointed by God Ministries Alliance & Seminary.

#PowerPost👊🏻👊🏼👊🏽👊🏾👊🏿™️ #OmegaPsiPhi #Inc #KappaOmicron #6th #Annual #RudyWPowell #Memorial #DinnerDance #BecauseTheWorldMustKnow™️ S/O to my fam @showboat92 for considering me for such a prestigious award: presented to Yusef Salaam, Litt.D For His Superior Service, Contributions to Our Communities,Perseverance in the Fight For Social Justice and Criminal Justice System Reform.

He’s now a motivational speaker who has traveled all over the country to educate people on criminal justice reform. Along with the remaining Central Park Five, he’s an activist with the Innocence Project and the most outspoken about social justice on social media.

He’s also a vocal critic of President Trump, who had published full-page ads in newspapers calling for the death penalty for the five teens in 1989.

He has received several honors and awards for his inspiring work, including a Lifetime Achievement Award from President Barack Obama in 2016.

In addition to his activism and speaking engagements, Salaam is also a poet.

Also Read: Freddy Miyares Wiki: Facts about the Actor Playing Raymond Santana in “When They See Us”