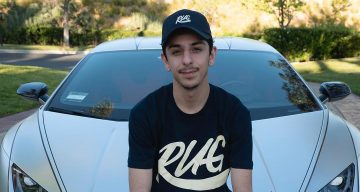 YouTube star FaZe Rug has gained a ton of popularity, thanks to his YouTube channel and Instagram posts. He has almost 8.7 million subscribers on YouTube, and his estimated net worth is $3.0 million. Not bad for a guy who’s barely legal!

FaZe Rug is a known face in the social media industry. He is mostly known for his prank and Call of Duty videos on his YouTube channel.

FaZe Rug’s real name is Brian Awadis, and he was born in San Diego, California. He has a brother, Brandon, and he calls his parents Mama Rug and Papa Rug. His parents are originally from Iraq.

FaZe Rug’s estimated net worth is $3.0 million. Most of his money comes from his Instagram and YouTube channel.

The social media star has three million followers on Instagram. He often flexes his cars and beautiful house on the photo-sharing app.

In April, FaZe Rug, along with other social media stars, participated in a huge and exclusive OVO Nike Air Jordan giveaway contest.

FaZe Rug’s subscriber count on his YouTube channel is now up to over 8.7 million. Additionally, he is a part of an eSports gaming team on the FaZe Clan channel that competes in Call of Duty, Counter-Strike: Global Offensive, Fortnite Battle Royale, and other tournaments. And he gets paid handsomely in prize money when he wins.

On his channel, FaZe Rug mostly uploads vlogs and pranks every single day. The 21-year-old vlogger started the channel on July 11, 2012, and he has come a long way. He mainly posts vlogs, pranks videos on his family, and challenge videos.

Sells His Own Merchandise

Because of his success on YouTube and Instagram, FaZe Rug has his own brand of clothing called Rug. The brand sells T-shirts, sweatshirts, jackets, hoodies, caps, phone cases, backpacks, poster sets, and stickers.

GUYS.. I couldn’t be any happier to announce the launch of my OFFICIAL RUG MERCH!! I’ve been working on this for months now and I’m just so happy ? LINK IN BIO

The products are priced between $9.99 and $54.99. So, he earns a good amount of money from the sale of his merchandise.

In 2016, FaZe Rug received his first YouTube plaque when his channel reached over a million subscribers! This is a huge accomplishment for any budding YouTube star, and Faze was proud to show it off!

My 1 mil plaque is finally here ? This is easily my most prized possession, and it's all thanks to you guys ❤️ I've never been this excited in my life. Thanks to YouTube for this amazing gift!

FaZe Rug’s house is 6,656 square feet and was constructed in 2002. It has five bedrooms and seven bathrooms. Additionally, it has four parking spaces so that FaZe Rug and his family can park their luxurious cars.

There is a balcony in every room. There is also a gym so that FaZe Rug and his family can work out in the comfort of their own home. The master bedroom has a walk-in closet.

IT'S FINALLY OFFICIAL ??? MY NEW HOUSE! Like the pic if you're HYPED!!!

The kitchen is filled with modern appliances, and the view from the house is beautiful and surrounded with greenery.

It’s a two-story house with a huge pool and a hot tub. The house is so huge that property taxes are estimated to be $30,000 each year.

However, it looks like FaZe Rug is planning to buy a new house, as he uploaded a video of him looking for a new house in March. Likely one for himself, since he’s getting older and probably wants his own digs, away from his parents.

Last year, he rented a $5.0 million house on Airbnb for his birthday.

FaZe Rug’s first official car was a gray 2015 Mazda 6. It’s unknown how much he sold the car for.

Currently, FaZe Rug drives a 2016 white Range Rover Autobiography that costs around $250,000. He also drives a Lamborghini, which he purchased at the age of 20 for approximately $200,000.

It's official guys. I just purchased a Lamborghini at the age of 20, and it's all thanks to you guys. Work hard and I promise your dreams will come true. I seriously owe this all to you ❤️ I'M SO SO SO HAPPY WITH THE CAR!! Double tap if you like it too ? Love you guys

FaZe Rug’s Lamborghini has satin frozen chrome with red chrome accents. It is certainly his most prized possession, and if you don’t believe so, just have a look at the prank his own parents pulled on him, where they spray-painted graffiti all over it!


But he’s not the worst son, and his parents believe he had it coming, especially for all the pranks he’s pulled on them! He bought his mother a Mercedes SUV. The price range for this vehicle is anywhere between $40,050 and $80,750.

Currently, FaZe Rug is busy making his YouTube videos and playing pranks on his family like he usually does. Hey, at least it’s garnering him some serious moolah!

Here’s How Much FaZe Rug Is Worth Compared to His YouTube Contemporaries: