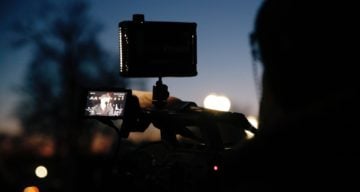 Rhode Islanders have to bid farewell to a popular sports anchor and Pats Nation personality. Yianni Kourakis announced that he is leaving WPRI back in June, and his last day at the CBS affiliate is here. The sports anchor had been covering sports and the New England Patriots for Providence for eight years, and now he’s moving on to the next step of his career. Where is Yianni Kourakis going? The sportscaster fortunately answered most of fans’ questions.

After graduating from the University of Maryland in 2007, Yianni Kourakis worked in Maryland- and Virginia-based markets before coming to Providence, Rhode Island in 2013. He has been the sports director, anchor, reporter, and host at WPRI for eight years.

And now his time at WPRI is coming to a close. Through a social media post in June, Yianni announced that he is leaving the station and the state.

Thank you all for watching for the last 8 years! pic.twitter.com/6OFxvWOyR7

Yianni said that his wife and family moved to Rhode Island with him when the opportunity at WPRI presented itself. So when his wife, Beth Kourakis, was recently offered an incredible promotion at her job outside Rhode Island, Yianni decided that this time, he would make the move for her career.

Beth’s new job is in Florida, and that’s where Yianni is heading to with their two kids. His last day at WPRI was on July 9, and his colleagues quipped that they knew about his departure for eight months but kept mum about it until he found a job in Florida.

So, Yianni Kourakis is taking his sports expertise to WPBF-TV, the ABC affiliate in West Palm Beach. He will launch their new sports broadcast team as an anchor and reporter.

While Providence will miss the Patriots Wrap host, WPRI viewers wish him well. And they can still keep up with him on his official social media pages.