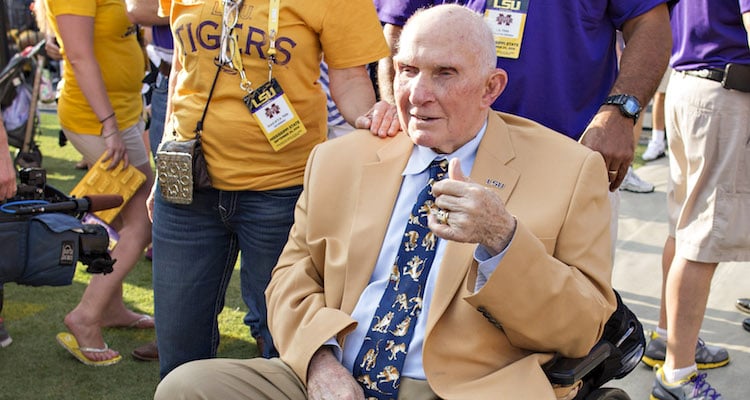 Yelberton Abraham Tittle Jr. was born on October 24, 1926, in Marshall, Texas. His football self-training began young as Tittle would spend hours trying to throw a football through an old tire. It definitely worked, as he would play as a quarterback for Marshall High School, even leading the school to an undefeated season in his senior year. When he completed high school, a bidding war began to gain Tittle as their school’s quarterback. In the end, Louisiana State University came out on top and Tittle played for the LSU Tigers in 1944. During World War II, freshman were able to play varsity immediately and Tittle hit the field running. His passing records of 162 completions out of 330 attempts for 2,525 yards and 23 touchdowns would be left untouched until Bert Jones joined the team in the 1970s.

Tittle was drafted into the NFL in 1948 by the Detroit Lions but ended up sidestepping the NFL for the AAFC and the Baltimore Colts, with Tittle ending up recognized as the league’s rookie of the year. The Colts eventually became part of the NFL in 1950 before folding completely at the end of the season. Tittle was then drafted by the San Francisco 49ers in 1951. From there, his career continued to grow and he stayed with the 49ers until 1961 when he was traded to the New York Giants.

When he began with the Giants, Tittle was considered long in the tooth for a quarterback. But as soon as he began to get a start as the primary quarterback, he quickly changed the minds of many fans and players alike. Tittle would go on to be awarded The Newspaper Enterprise Association’s Jim Thorpe Trophy as the NFL’s players’ choice of MVP that year. He made and broke a number of records during his seasons with the Giants, ultimately retiring at the age of 39.

During his NFL career, Tittle completed 2,427 out of 4,395 passes for 33,070 yards and 242 touchdowns, with 248 interceptions. This is not to mention the 39 touchdowns he scrambled for. There’s a Y.A. Tittle famous photo taken towards the end of his football career. His helmet is off and he has blood dripping down his face as he’s kneeling on the ground. Unknown at that moment, he had a concussion and cracked sternum. The photo would be used in Life magazine and is one that truly captures the spirit of football.

RIP to the legendary Y.A Tittle a true legend, amazing leader and one of the toughest athletes ever. Wish I could have met you. #rip #nfl #yatittle #football #toughness #legend

It’s important to keep in mind that while Tittle made good money for a football player in those days, it’s nothing compared to the millions upon millions of dollars today’s player receive in their contracts. In the offseason, he sold insurance but wasn’t done with football. He served as an assistant coach for the 49ers and then did a stint as a quarterback mentor for the Giants. He eventually formed his own insurance company called Y. A. Tittle Insurance & Financial Services. He also got married and had three sons and a daughter, Dianne, who wrote a book about her dad called Giants & Heroes: A Daughter’s Memories of Y. A. Tittle in 1995.

The End of a Legend

The quarterback passed away at a hospital near his home in California. Y.A. Tittle’s cause of death has not yet been revealed, but it is known he was having problems with dementia in his later years. And while others might beat Tittle’s earnings in football, there will be few that will ever begin to compare with his spirit for the game.