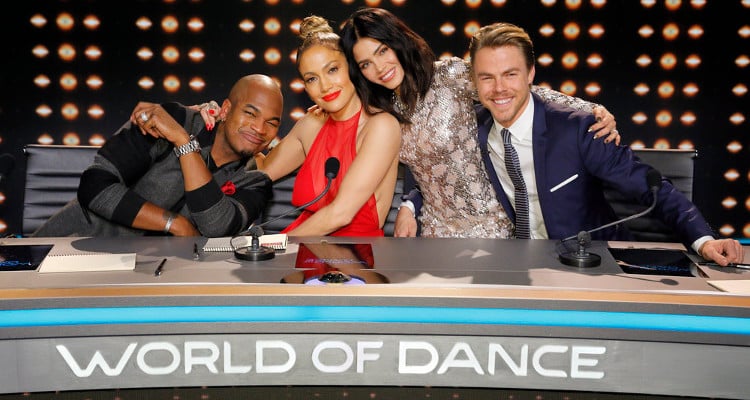 NBC is packing on the entertainment this summer! Not only is America’s Got Talent returning with an all new season, we will see some of the best dancers take the stage on World of Dance. The show features dancers —solo and group— from all styles, competing for the grand prize of $1.0 million. These are the best dancers in the world, and they can only be judged by the best. The World of Dance judges are itching to get on stage themselves, and with this lineup of judges, we won’t complain if they do! They are, after all, the biggest stars of dance today. Who are the World of Dance judges? Check them out right here!

It’s official! Jenny from the block will be one of the judges on World of Dance! J-Lo currently stars in the NBC drama, Shades of Blue, which she also executive produces. Now, she’s expanding her producing credits with this new reality dance competition, and is back in the judges chair for World of Dance. Lopez is going back to her roots on the dance floor, and we can’t wait to see her spice things up on the show!

“It’s like a dream come true and, like, the perfect job for me. In a sense, we created literally the perfect show for me to be a part of,” Lopez said calling dance her “first form of artistic expression.” The former American Idol judge started her career as a dancer with the Fly Girls —the house dance crew of Fox’s In Living Color. She went from Janet Jackson’s backup dancer to a popstar, actress, designer, and even author.

Having been a struggling dancer herself, Lopez felt that the show was a way to give back to the dance community. “I ate one slice of pizza each day —no breakfast, no lunch. I would eat it at 6 p.m., so it would hold me over until the next day. That’s how I lived, once I moved out of my mom’s house, and I did that for a couple of years before I got my first big job, and I wouldn’t change it for the world.”

…AND the judges dance too!! BTS of World Of Dance promo!! #WorldOfDance premieres Tuesday, May 30th at 10pm on NBC!! Don't miss it!!

Jenna Dewan Tatum’s life revolves around dance. She was a backup dancer for Janet Jackson, Christian Aguilera, and Pink before her breakout role in the dance feature film, Step Up, where she met Channing Tatum. The couple is now married and have a beautiful daughter. After recurring roles in TV shows, Dewan Tatum is returning to dance with World of Dance.

Though not a judge, she will be the show’s host and she will help mentor the contestants. J-Lo shared a clip of her rehearsing a routine with Dewan Tatum, and the girls simply slayed. No surprise there! These ladies have been dancing professionally since forever, and we’re all too glad to see Dewan Tatum dancing again! Perhaps a routine with her husband could be in the works?

It's all about dance dance dance!! Don't miss the premiere of #WorldOfDance TUESDAY at 10pm on NBC! #DanceTalk pic.twitter.com/tmevK5p70q

We missed Derek Hough on Dancing with the Stars this season, but we are happy to report that the born-and-bred dancer is back on our TV screens once again! Not only is he the six-time champion in the history of ABC’s Dancing with the Stars, but his routines have also won Emmys. He’s also brought classic productions like Singin’ in the Rain and Footloose to the stage. Most recently, he starred alongside Jennifer Hudson, Ariana Grande, and Martin Short in Hairspray Live.

For such a prolific dancer, you’d think sitting behind the desk and watching other mind blowing acts would be difficult. As Hough puts it, “There are definitely moments when I feel like I want to get up and dance with them, absolutely. I get itchy feet. With that said, I actually felt quite comfortable straight away. I got the judging groove pretty quick.”

Don't forget to tune in this Tuesday at 10pm on #NBC. WORLD OF DANCE @jlo @neyo @jennadewan

Grammy-winning singer/songwriter, Ne-Yo joins Lopez and Hough as a judge on World of Dance. If you have doubts about his dancing abilities, rewatch Stomp the Yard and Save the Last Dance 2. Or you can check out his effortless moves in any of his music videos!

Ne-Yo took a break from fame when he recently married, and became more focused on his wife and newborn baby. When he returned to music, the show piqued his interest. “A lot of people don’t really know this,” Ne-Yo said, “But dancers are NOT paid well. At all.” He added that even dancers who perform with the biggest stars don’t get the respect and fame they deserve. What drew him to the show was the opportunity to give dancers the “respect, recognition and financial compensation that they so absolutely deserve.” Ne-Yo expects the contestants to dance like their life depends on it and nothing less. It looks like we know who the toughest judge on the panel will be!

World of Dance premieres tonight at 10 pm EST only on NBC.