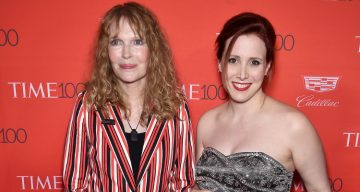 Following the Harvey Weinstein scandal, many people are coming out with more stories of sexual harassment. Another person who has recently come forward is Mia Farrow’s daughter, Dylan Farrow. Dylan Farrow had accused Woody Allen of sexually assaulting her years ago. At that time, no charges were laid against Allen. Now, Dylan Farrow asked Hollywood why Woody Allen has been spared from the allegations. Keep reading to know more about Dylan Farrow’s sexual abuse allegations in our Dylan Farrow wiki.

In the midst of all the recent sexual allegations in Hollywood, Dylan Farrow has started questioning why Woody Allen didn’t face any backlash like the others in the industry, especially when she came forward detailing her claims.

Dylan Farrow wrote, “I have long maintained that when I was 7 years old, Woody Allen led me into an attic, away from the babysitters who had been instructed never to leave me alone with him. He then sexually assaulted me. I told the truth to the authorities then, and I have been telling it, unaltered, for more than 20 years. Why is it that Harvey Weinstein and other accused celebrities have been cast out by Hollywood, while Allen recently secured a multimillion-dollar distribution deal with Amazon, greenlit by former Amazon Studios executive Roy Price before he was suspended over sexual misconduct allegations?”

Farrow further added, “The truth is hard to deny but easy to ignore. It breaks my heart when women and men I admire work with Allen, then refuse to answer questions about it. It meant the world to me when Ellen Page said she regretted working with Allen, and when actresses Jessica Chastain and Susan Sarandon told the world why they never would. The system worked for Harvey Weinstein for decades. It works for Woody Allen still.”

Woody Allen denied these allegations, and nothing was done about them. And, Dylan Farrow is certainly upset about this as well. If you want to know more about her, then get the scoop right here.

Born on July 11, 1985, in the United States, Dylan Farrow’s age is 32. She was adopted by actress Mia Farrow when Farrow was only two weeks old. Initially, Farrow was called Eliza and then renamed Malone for a while.

I will have to say that everything i have been going thru for the last two and half years, this is truly #inspiring ! Thank you #DylanFarrow ! You are a #strong #woman and im very very proud of your #courage ! Thank you for showing me i made the right decion!!

As of now, there are no details about where Farrow was adopted from and who her biological parents are. However, her adoptive mother made sure that Farrow never felt like she was an adopted child. She has several siblings as Mia Farrow had adopted many kids and had a huge family.

Dylan Farrow followed in her adoptive parents footsteps and pursued a career in the Hollywood industry.

Farrow is reportedly working as a writer now.

Reportedly, on August 6, 1992, Farrow who was seven years old that time, told her adoptive mother that she was sexually abused by Allen in their house in Connecticut. Mia Farrow spoke about these allegations to their pediatrician, who informed the authorities.

According to sources, Allen was informed about the allegations on August 13, 1992. However, Allen denied the allegations and instead, sued for the full custody of their son, Satchel, and two of their adopted kids.

In June 1993, Justice Wilk said that he found, “no credible evidence to support Mr. Allen’s contention that Ms. Farrow coached Dylan or that Ms. Farrow acted upon a desire for revenge against him for seducing Soon-Yi. Mr. Allen’s resort to the stereotypical ‘woman scorned’ defense is an injudicious attempt to divert attention from his failure to act as a responsible parent and adult.”

In fact, Allen’s full custody case was denied, and he was denied the right to visit Farrow. The judge further explained that although the complete truth of the allegations may not be known, “the credible testimony of Ms. Farrow, Dr. Coates, Dr. Leventhal and Mr. Allen does, however, prove that Mr. Allen’s behavior toward Dylan was grossly inappropriate and that measures must be taken to protect her.”

In 2014, Farrow reportedly renewed her sexual allegations claim against Allen. However, Allen again denied those allegations. Until now, they have not been proved.

Who Is Dylan Farrow’s Husband?

Dylan Farrow met her husband through an advertisement on The Onion.

Farrow said about their relationship, “And we have been in love ever since. Yesterday was the anniversary of our first date. It’s been seven years. He is the most wonderful man in the world. When they say living well is the best revenge – I have that. My conscience is clean.”

The couple welcomed their first child, a baby girl, in September 2016. They named their daughter Evangeline. And actress Mia Farrow was quite excited about the arrival of her grandchild.

Evangeline, Bowie and spaghetti on Sunday

Farrow’s pregnancy was announced in April 2016 and she told reporters, “I picked a name, but my husband would kill me if I told you. He wants it to be a secret.”

It looks like Dylan Farrow is not active on social media. Unlike her mother and siblings, Farrow probably likes to keep her life private and away from the public eye.

As of now, no comments have been made by Woody Allen or other celebrities.

What do you think about the situation? Let us know your opinion in the comments section below.