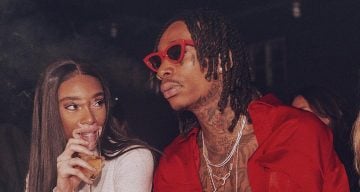 It looks like Wiz Khalifa is falling in love again! Or at least, the latest Instagram posts of ANTM contestant Winnie Harlow and the rapper suggest it! The couple posted pictures of each other on their respective Instagram accounts of the same event they were at in Germany. While Harlow was working through a glass of champagne looking at peace next to Wiz, he appeared quite happy, too!

Could a serious relationship be the works for Winnie Harlow and Wiz Khalifa or is it just a “friendly” relationship? That’s what everyone is asking after eyeballing their recent Instagram posts. The two are looking pretty cozy together, and it’s pretty suspicious that they both posted photos of them together at the same event! Will Winnie Harlow become Wiz Khalifa’s new girlfriend?

The stars’ comments sections are flooded with a lot of questions involving Wiz’s ex, Amber Rose, too, but nothing is confirmed just yet.

When Wiz Khalifa posted the picture, a die-hard fan of the rapper commented, “All for this here!! Wiz you have be a Virgo lol [sic].” 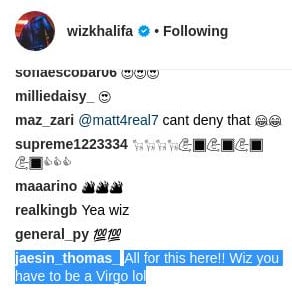 Wiz returned his comment with, “and you know this.” 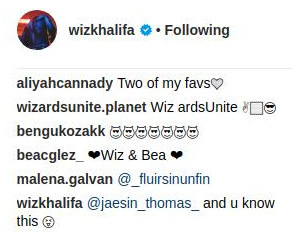 Model Winnie Harlow also got into some of the action by posting some heart emojis! 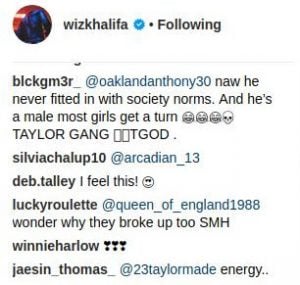 The couple seems to have attended the Berlin Fashion Week and Hugo Boss’ bash and the flirtatious banter has raised more than a few eyebrows!

The couple sat next to each other during the show and looked to be very comfortable. And although there is no confirmation as to whether they left the party together, their Instagram posts sure say that they had some fun!

With all the heart emojis the couple shared in their posts, it’s not difficult to put two and two together.

Although the latest rumors suggest that Amber Rose is okay with Harlow, we might hear otherwise later!

Amber Rose and Wiz Khalifa are the epitome of co-parenting. The couple married in 2013 and welcomed a son, Sebastian, who was born the same year. However, they announced in 2014 that they were getting a divorce. Today, they are reportedly still the best of friends.

Amber Rose has also dated Kanye West in the past, who is now married to social media queen Kim Kardashian.

Nevertheless, more and more fans are loving this alleged new couple on the block! And they want them to become a unit now, too.

The model, who has vitiligo (a skin pigmentation condition) was first seen on America’s Next Top Model, and was discovered by Tyra Banks. Although she didn’t win, the TV exposure was more than enough to get agencies to line up for her.

Winnie Harlow is the first model who has such a skin condition, showing the world that being beautiful doesn’t mean having perfect skin and hair. She wears her confidence like armor, and has openly said before that she is not a “vitiligo sufferer” but is a “vitiligo model.”