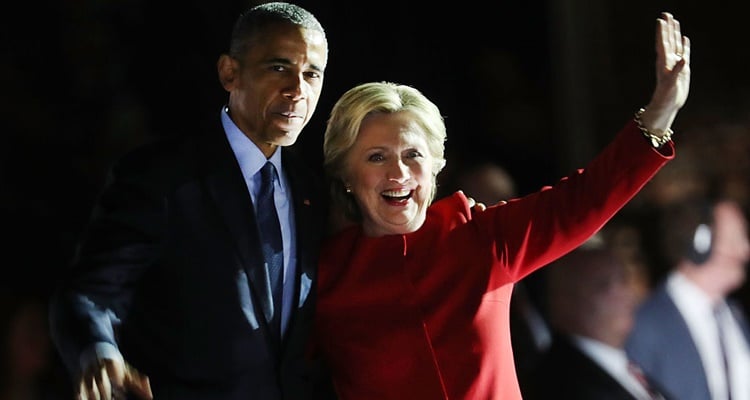 Word has it that the White House would consider granting Hillary Clinton a pardon, despite the fact that she has not been charged with anything. Is President Obama considering pardoning Clinton for his last task as President?

The President of the United States has the executive authority to grant clemency to federal offenders. Following Donald Trump’s victory, the White House addressed the media with press secretary, Josh Earnest, taking questions. Since Hillary Clinton lost the presidential election, there have been talks that Trump will initiate criminal proceedings against her, even though no charges have been placed. Earnest’s response on the matter possibly indicates that President Obama isn’t ruling out the possibility of granting Clinton clemency. President Obama can pardon Hillary Clinton, but the bigger question is, will he pardon her while he still has the power to?

President-elect Donald Trump had said that he would appoint a “special prosecutor” to handle the Clintons’ case. During the presidential debates, Trump stated that he would put Hillary Clinton in jail over her e-mail scandal should he win the presidency. FBI director, James Comey, has twice cleared Hillary Clinton of any criminal activity regarding her e-mail server.

However, the case could be re-opened (again) and Trump could appoint another FBI director to the case. The new director could investigate further and could even come to a different verdict. There is also speculation that the Clinton Foundation will be investigated.

In this case, Hillary Clinton is threatened with conviction and incumbent, and President Barack Obama might be her only hope. “The President has offered clemency to a substantial number of Americans who were previously serving time in federal prisons,” Josh Earnest said to the press on Wednesday (November 9). “And we didn’t talk in advance about the president’s plans to offer clemency to any of those individuals and that’s because we don’t talk about the president’s thinking, particularly with respect to any specific cases that may apply to pardons or commutations,” he added.

Earnest also added that Hillary Clinton had worked very hard for a long time, and they are indebted to her for service to the country. But President Obama has faith in Trump, who was gracious to his opponent in his victory speech saying, “We’ve got a long tradition in this country of people in power not using the criminal justice system to exact political revenge,” Earnest said referring to the President’s thoughts on the case.

The President can pardon Clinton even if she doesn’t request one. Many have said that, should Clinton be re-elected, President Obama should pardon her so her administration is not tied up with the Republicans initiating additional FBI inquiries against her. In 1974, President Gerald Ford had pardoned his predecessor, Richard Nixon, for any crimes he might have committed as president. The act was considered necessary for the country to move on and heal.

Obama can justify Hillary’s pardon by saying that Trump pre-judged her case for his campaign agenda. But she’s not been charged with anything yet. So, it’s too soon to tell.

Will Hillary be Pardoned?

The White House may be considering the option of pardoning Clinton, but it has to be a very calculated political move. Both Obama and Clinton risk damage to their image should Hillary Clinton be pardoned without a proper investigation and justification of clemency.

However, the Obama administration has nothing to lose as Obama cannot be re-elected, and Clinton’s political run is as good as over.

As for Obama, he will happily pardon someone, as long as it is by the book. Ford pardoning Nixon cost him re-election, and Bill Clinton was heavily criticized for granting a large number of pardons on his last day of office. If the outgoing president grants Hillary Clinton a pardon, it will be met with a storm of criticism, and the Democratic party might suffer.

Whether President Obama will pardon Clinton or not is uncertain, since she has not even been charged with a crime. Donald Trump’s team has commented that the Clinton issue is currently taking a backseat, and Trump would rather focus on the economy, among other important matters, when he takes office.