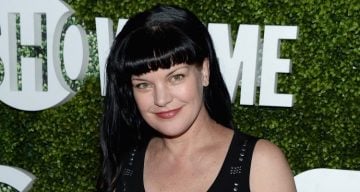 Whether you realize it or not, there’s a good chance Pauley Perrette has been a part of your viewing habits for a long time. Perrette broke into acting in the early 90s. She’s been in ABC Afterschool Special about being yourself, she played a waitress in two episodes of Frasier, and she did voice-over work for a Blade Runner video game. But it wasn’t until 1996 with a reoccurring role on Murder One that she would find regular work. After Murder One she went on to do stretches on The Drew Carey Show, Time of Your Life, and Special Unit 2 before ending up as Abby Sciuto on NCIS in 2003.

One might think that fitting into the shoes of Abby Sciuto might be a tough fit for an actress, but in the case of Pauley Perrette, Abby seems to be a case of destiny. Pauley Perrette studied criminal science at Valdosta State University in Georgia and at the John Jay College of Criminal Justice in New York City. We’d like to think that Perrette’s time as a mohawked bartender in the New York club scene may have also helped her prepare for the role a little.

Abby is a great character on television. She is a smart woman who doesn’t necessarily fall into the stereotypes that society might otherwise put onto a goth character. She works with death but often, she’s the happiest character on the show. Abby is one of two characters that have been with the show from the very beginning. Which begs the question, why leave now?

The End of an Era

When an actor ends up leaving a television show, the rumors start to spread pretty quickly, and usually those rumors focus on if the actor was fired and/or the reasons behind their sudden departure.

From this point, we can only speculate. It does not appear that Perrette was fired, as she stated in a tweet that her bosses at the network weren’t mad at her, which seems to indicate that Perrette leaving NCIS was not only her own choice but done on good terms with the CBS.

Pauley Perrette’s net worth is estimated somewhere around the $16.0 million dollar mark but by all appearances, she lives a rather modest lifestyle, so we doubt money was the reason for her to leave. But we do think we’ve tracked down a possible reason. In an interview with the Associated Press in 2011, Perrette stated:

“There’s no drug that I ever did that worked as well as being an actor, what you’re looking for with substance abuse is an escape. But with acting, you can escape into 1,000 different things without almost killing yourself doing it. Acting is a total drug.”

Perrette’s been on NCIS since 2003. As an actor, the steady work must be great but she’s been playing the same character for 15 seasons! The itch to do something a little different wouldn’t be surprising. Perrette is at a pretty comfortable financial position at this stage of her life but she’s also getting a little older. Now would be a very good time to try something else out, whether that be new roles, new businesses (like the Donna Bell’s Bake Shop she co-owns in Manhattan), or something entirely different. So, for Pauley Perrette, 2017 may have started again with her role as Abby Sciuto, but it looks like her 2018 may bring her new adventures.