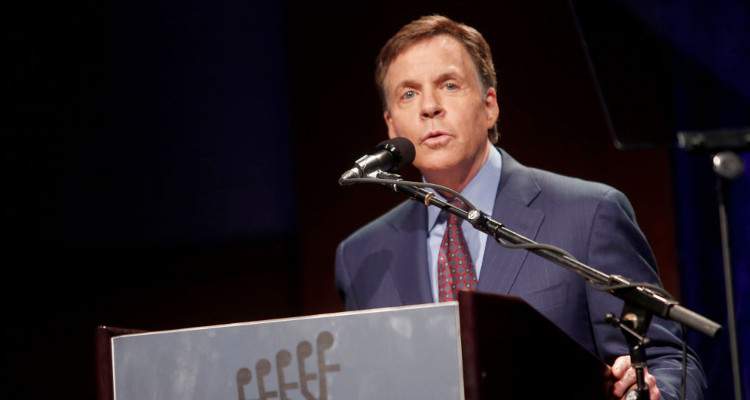 The 2018 Winter Olympics are here! The sporting event in Pyeongchang, South Korea, has hundreds of athletes from around the world competing for glory. In the past, fans enjoyed NBC’s Olympics broadcast hosted by Bob Costas. But this year, Mike Tirico will replace Costas. Why is Bob Costas not hosting the Olympics? Keep reading to find out!

A familiar face missing at this year’s Pyeongchang Olympics Games TV coverage is that of Bob Costas. The beloved sportscaster will not be presenting the Olympics this year, and Mike Tirico will be taking his place.

During the Sochi Games in February 2014, Bob Costas’ pink eye led to him backing out of the Games for a few nights. His eye infection also became fodder for many internet memes!

So, where is Bob Costas? We have everything you need to know about Bob Costas’ Olympics 2018 disappearance right here!

Who Is Bob Costas?

First, here’s a short introduction to the longtime sportscaster.

Bob Costas began his professional career as a sportscaster while attending Syracuse. He served as an announcer in a minor league hockey game before going on to work for a radio station in St. Louis, Missouri, and later being hired by NBC Sports in 1979.

For a long time, Costas hosted NBC’s professional football and basketball coverage. He also hosted the coverage for basketball, golf, boxing, NASCAR, and other sporting events for the network.

Bob Costas’ primetime Olympics hosting journey began at Barcelona in 1992. Since then, he went on to host the Summer and Winter Olympics until Rio 2016.

Costas bravely endured an eye infection at the Sochi Games in 2014 before being replaced by other NBC broadcasters. It was the first time he missed covering the Olympics since 1998, when NBC did not hold the rights to broadcast the Olympics.

What Happened to Bob Costas?

Exactly a year ago, on February 9, 2017, Costas announced that he began the process of stepping down from major roles at NBC Sports, including hosting duties at the Olympics.

Costas handed the baton to Mike Tirico, who will be hosting the Winter Olympics at Pyeongchang.

Talking about how the departure was what he wanted, and that it was on his terms, Costas said, “It’s better to leave before they drop hints. Like, ‘Do you think it might be a good idea?’ Or, ‘Are you getting tired yet?’ Or, ‘Can we help you up the steps?’ Or, ‘Do you need another cup of Ovaltine, sir?’ I didn’t want it to get to that point. So, this was entirely on my terms, and I like it that way.”

“It just felt like this was the right time. I have no misgivings about the situation. … I’m not retiring. I’m just transitioning,” Costas added.

Where Is Bob Costas Now?

Last year, NBC Broadcasting & Sports Chair Mark Lazarus spoke about Costas’ new role with the network and said, “He’ll have an on-going role around our big and iconic events. But in terms of day-to-day, he’s taking a step back as he heads towards slowing down his trajectory with us.”

One of the major events Bob Costas was going to cover was last Sunday’s Super Bowl LII. But the longtime sports broadcaster was notably missing from football’s biggest event.

Reports swirled that Costas missed the event because of his comments about football’s link to brain trauma in November 2017.

At a University of Maryland visit, Costas reportedly spoke about football’s decline and evidence that it “destroys people’s brains.”

The NBC Super Bowl pre-show was hosted by Dan Patrick and Liam McHugh instead of Bob Costas, and everyone was wondering why.

Costas denied that his comments were the reason he did not host the Super Bowl and said, “The decision was mutually agreeable, and not only do I not have a problem with it, I am actually happy about it. I have long had ambivalent feelings about football, so at this point, it’s better to leave the hosting to those who are more enthusiastic about it.”

Bob Costas will continue working with NBC. He will also be fulfilling his role with the MLB Network where he hosts a show called Studio 42 with Bob Costas.

Fans will definitely miss Bob Costas at the Olympics 2018 and are hoping for a big comeback soon!