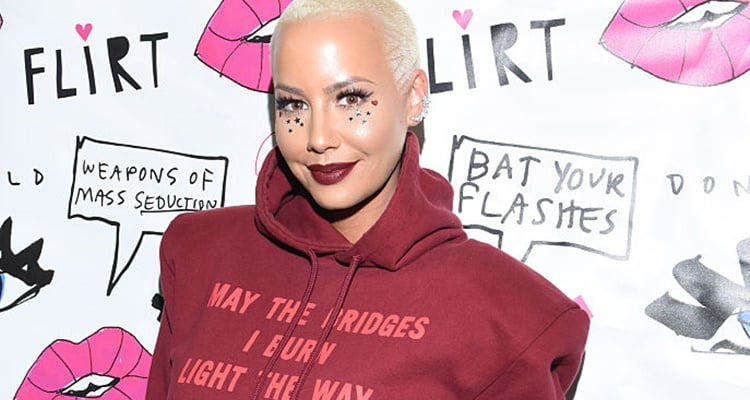 Amber Rose uploaded a shocking video on Instagram stating that she won’t be active on any of her social media pages for a while. Find out what happened, and when will she come back.

Amber Rose has been busy working on other projects after being eliminated from Dancing With the Stars. However, a shocking video is circulating, saying that Amber Rose quits social media. On Monday (November 28) Rose released a video on Snapchat, Twitter, and Instagram telling fans that she will not be posting on her social media accounts.

Rose said, “Hey guys, I just want to let everyone know that I’m taking the rest of the year off of social media. So I’ll have Jo, my assistant, post some cool stuff for me and I’ll see you in the New Year.” In the video, she was devoid of any makeup, but had the Snapchat flower crown filter.

In her Instagram video, she promised to come back next year. The reason for social media detox was not mentioned.

Amber Rose was a part of season 23 of Dancing With the Stars. After her elimination from the show, she was frequently spotted with pro-dance choreographer, Val Chmerkovskiy. Chmerkovskiy even attended Rose’s 33rd birthday party in October. Sources claim that the pair were very comfortable around each other.

The couple were spotted partying in Hollywood for Halloween. Some sources claim that they are together, and are taking their relationship slow.

On The Amber Rose Show, which premiered in July 2016, Rose revealed that she once stole a lipstick to look like her friends. “Back in Philly, all my friends were wearing dark brown lip liner and lighter brown lipstick. And everybody had their baby hairs, like, plastered down to their forehead. That was the move. We were really poor, and I couldn’t afford the lipstick. So I went into a drugstore and stole one because I had to have it. I stuck it up my sleeve, and I felt really bad – but I did it all in the name of beauty,” explained Rose.

Although Amber Rose has not disclosed her reason for quitting Instagram, she did say that she will back next year. Is it social media detox? Or is she following in the footsteps of Kendall Jenner?

Two weeks ago, Kendall Jenner’s fan were shocked when they could not see the young model’s Instagram page. While on the The Ellen DeGeneres Show, Jenner revealed that she has decided to quit social media. She claims that she was glued to her phone and social media, and it made her feel that she was dependent on the technology.

Kendall Jenner further revealed that she was shocked about her decision becoming major news.

This move comes right after Kim Kardashian decided to stop posting photos on her social media accounts, following the Paris robbery incident. So, does this mean that Amber Rose took a page out of the Kardashian-Jenner book?

Maybe her decision came after all the negative backlash Rose has been receiving lately from her fans? Whatever the reason may be, we hope she is doing fine and will be return in 2017!