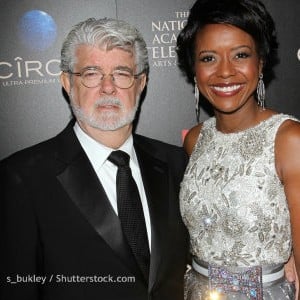 George Lucas has joined the ranks of famous sugar daddy husbands. The 69-year-old Star Wars director tied the knot with his longtime girlfriend, 44-year-old Mellody Hobson, on June 22, 2013. The couple first started dating in 2006 after meeting at a business conference, and Lucas proposed in January 2013. Their wedding ceremony took place at a hotel in Chicago in front of a famous guest list, which included the likes of actor Samuel L. Jackson and director Ron Howard.

Lucas and Hobson aren’t oblivious to the 25-year age gap between them, but they’ve been fairly open about why their relationship has thrived despite it. “I think it works because we are extraordinarily open-minded people, and we’re open to what the universe brings us,” she revealed in an interview with Oprah Winfrey. “We didn’t have preconceived ideas about what a partnership should be, and so we allowed ourselves to discover something that was unexpected.”

Lucas and Hobson are a perfect example of how it isn’t always all about money when it comes to older men dating younger women. These are two successful individuals in their own rights, who happened to find love outside of the traditional age range.

What do you think: Will George Lucas’ marriage to a younger woman last, or does the large age difference pose a threat to their lasting union?