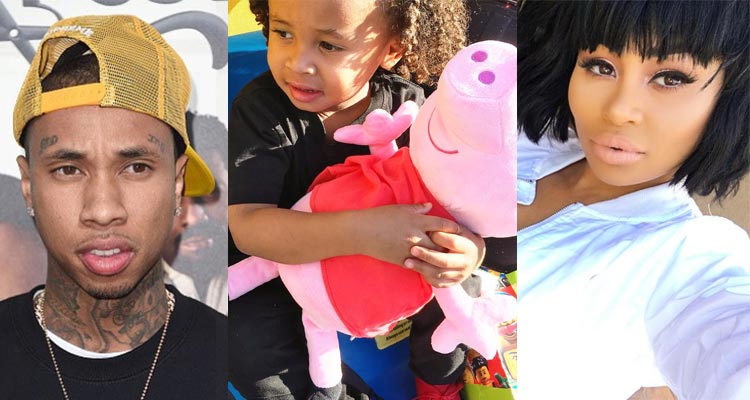 Sharing custody of children can get really ugly when a separated ex-lover doesn’t like what the other one does with their kids. The latest scoop on Hollywood’s custody battles is the warring between rapper Tyga and his ex Blac Chyna. And, the fight has turned so ugly that Tyga is determined to destroy Blac Chyna’s life!

Things have gotten worse between the ex-lovers as the rapper is getting ready to file a lawsuit against Blac Chyna for primary custody of their son, King Cairo Stevenson. Tyga and Blac Chyna’s son King is just three years old right now and he is about to face bitter fights between his parents.

It makes me happy to see the mother of my son happy.My only concern in this situation is my son. I want him in happy environments.

According to Hollywood Life, the reason behind why Tyga wants to destroy Blac Chyna’s life is that the 26-year-old rapper hates the environment his son is getting into. Tyga tweeted about his anger over how Blac Chyna is keeping “direct negativity” around their son King every time the baby boy is with her. Tyga feels his son should not be dragged into situations and environments that are unfavorable to kids.

While the world’s busy buzzing over Blac Chyna showing off a huge diamond ring from her recent engagement to Rob Kardashian, it’s Tyga’s tweets that have shed a light on the woman’s speculated irresponsibility. As Blac Chyna’s only considered to be a hot video vixen and model, most people tend to forget of how she’s also a mother. Tyga is a concerned father who’s gearing up against the 27-year-old model for full custody of their son King. No one knows how Blac Chyna’s new life with Rob Kardashian will go, but you’ll get an idea of how her relationship with ex-lover Tyga is getting ruined by looking at the rapper’s tweets.

Everybody deserves 2 be happy. What some1 does for their happiness is not my concern, as long as it’s not interfering wit my happiness.

He’s innocent in this. & I want him to feel as much love as possible.

Only an evil heart would direct negativity at a child & make fun of him for being in a situation that is out of his control.