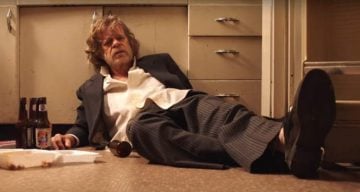 The Sims twins, Brennan and Blake, stole everybody’s heart with their cute portrayal of the youngest Gallagher child in the acclaimed series, Shameless. However, they are likely to be replaced by an older actor as reports of time jump in the storyline begin to surface. The twins’ mother addressed the rumor on their Instagram account.

Will there be a new Liam on Shameless? Liam Gallagher is the youngest of six, and his role is played by twins, Brennan Sims and Blake Sims. According to reports, the twins will no longer have a part in the show. Why did they replace Liam on Shameless? Keep reading to find out!

Even though his biological parents are white, Liam is black. This is apparently due to a dominant gene that the Gallaghers inherited from Frank’s grandmother. As Liam has slow verbal and emotional growth, the rest of the family go out of their way to take care of him. In season 4, he accidentally ingests cocaine and has to be hospitalized. Though he survives and comes back home, he might have suffered some brain damage. Shameless is currently in its eighth season, and according to some sources, it could very well be its last.

Did They Replace Liam on Shameless?

It looks like they will replace the Sims twins and bring in a new Liam on Shameless. The Sims’ mother revealed in a post on their Instagram account that her two boys are out of the show saying, “Thank you guys for everything. The boys will miss you all. Wish everyone great success for season 8,” along with a photo of the Shameless season 8 cast. Her post generated many comments from fans who expressed their sadness at the possibility of the twins not playing Liam anymore.

Possibility of a Time Jump?

Landlady is a good look on you, Fi. ? Catch @emmyrossum on the new season of #Shameless this Sunday! #Showtime

It was reported that the twins will not be on the show anymore because of a time jump that occurs this season. This means an older actor will need to be brought in to play Liam. In fact, the Sims’ mother confirmed in the comments of her post that there would be a new Liam on the show, but details as to why that is are unconfirmed. Showrunners have not yet confirmed this news, nor have they revealed who will replace the twins as Liam Gallagher.

Shameless has received a ton of accolades since its premiere in 2011, with The Hollywood Reporter writing “Shameless is excellent, compelling television from the first moment. As long as it stays true to the roots of the original, it’s going to be essential viewing.” Though fans of the twins might be upset at their absence, the series itself will likely proceed with a new actor playing Liam Gallagher.