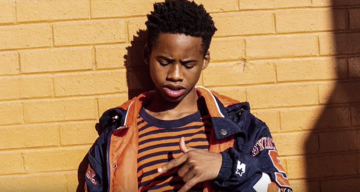 Rapper Tay-K, a.k.a. Tay-K 47, gained more popularity after going to jail than he did when he was living free. While behind bars, his songs went viral and the hits started racking up. That being said, many are wondering, why did Tay-K go to jail? When does Tay-K get out of jail? The story of Tay-K, his rap career, current legal problems, and the cult of personality that began to surround him can be found right here.

Born Taymor Travon McIntyre, Tay-K is a fresh-faced, 17-year-old who began rapping with songs like “Sly Cooper” and “Megaman” in 2015.

What did Tay-K go to jail for? In a word, murder. Tay-K was accused of being part of the Ethan Walker robbery. According to prosecutors, Tay-K and seven other individuals planned to rob Walker, who was then shot to death. Tay-K and his alleged accomplices were arrested on July 16, 2016. The rapper was placed under house arrest until trial but apparently, that became boring and Tay-K got a different idea.

Charge Number 2 and “The Race”

On March 27, 2017, Tay-K and another one of the accused reportedly cut off their ankle monitors and went on the run. Prosecutors allege that he had a stopover in San Antonio, and that Tay-K was part of the group of men who murdered Mark Anthony Saldivar in a Chick-fil-A parking lot. He then headed northeast, eventually ending up in New Jersey where he was caught in July. What makes the story interesting is the social media aspect behind it.

Before he went on the run, Tay-K essentially announced his intentions on Twitter with a tweet saying “f**k dis house arrest s**t f**k 12 they gn hav 2 catch me on hood, [sic]” and like that, he was gone. But he wasn’t offline. Tay-K’s Twitter history shows that he was tweeting somewhat regularly while avoiding police. He even made a track called “The Race” that specifically mentions him going on the run. The song was released around the time he was eventually caught in New Jersey. Oh, and did we mention he also made a video for “The Race” before he was caught? Tay-K’s social media went into overdrive gaining followers on his various accounts. Rappers like Lil Yachty and Tyga even got in on it by doing remixes of the track. As of this writing, “The Race” has over 16.0 million plays on Soundcloud and a massive amount of likes and shares.

So, where do we stand now? Is Tay-K out of jail? How long is Tay-K in jail for? Well, once he was captured, his case got really serious, really fast. He is accused of murder in a state that does not take kindly to such crimes. When returned from New Jersey, and after some additional legal proceedings, it was determined that Tay-K would be tried as an adult and would stay in an adult prison until trial.

In September, murder charges were laid upon Tay-K in relation to the murder of Saldivar. The rapper is now facing multiple charges stemming from a robbery, two murders, and escaping his house arrest in Texas, a state where the death penalty is still used. None of the victims were over 25 and, by the time his trial ends, there’s a good chance Tay-K won’t be either.