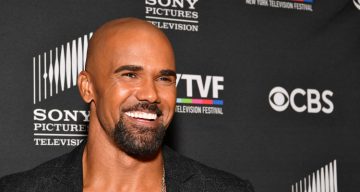 Fans of Shemar Moore were upset when the actor left Criminal Minds after being on the show for 11 years. He left because he wanted to challenge himself and explore new avenues in his career. Moore will soon be seen on the new CBS action series S.W.A.T. and in a one-off episode of Criminal Minds on Wednesday, October 25.

Is Shemar Moore back as Derek Morgan on Criminal Minds? No, he’s not.

He will, however, come back for one episode that will air on Wednesday, October 25, 2017. His character will help Penelope Garcia (Kirsten Vangsness) solve a complicated case that puts an emotional toll on her.

Yes, it will be a single appearance on his old show. Moore was on the show for 252 episodes and made a deep impression on viewers. So, why did Shemar Moore return to Criminal Minds?

The actor made a guest appearance in season 12, and is back for one episode this season for Derek Morgan to help Garcia handle a case. But why did Shemar Moore leave Criminal Minds in the first place?

Since he left in season 11, people want to know what happened to Shemar Moore on Criminal Minds.

After 11 years and 252 episodes, he decided to leave the show in March 2016. In an interview with TV Guide, Moore said that he left because he wanted to do something different, adding that when it came to making decisions, he believed in his mother’s motto, “Leap, and the net will appear.”

Moore said, “She thought outside of the box and she never got too comfortable because she wanted to continue to grow. There’s been other people in my life who are like that too. I don’t want to be ordinary. I don’t want to follow. I want to be bold and I want to see what I’m capable of. So yes, it was my decision.”

If you missed seeing the actor on your screens, we have good news for you. He is returning with a brand-new show in November.

Shemar Moore’s new show, S.W.A.T. is a reboot of the 2003 movie of the same name that starred Colin Farrell. In the show, Moore plays former Marine Daniel “Hondo” Harrelson who leads the elite squad.

S.W.A.T. premieres at 10:00 p.m. EST on Thursday, November 2, 2017, on CBS, and showrunners have great expectations. Moore is also looking forward to its premiere, as this will be the first time he will be a show’s lead character.

Moore is coming to our television screens once again, and he is still on fire and ready to kick butt!