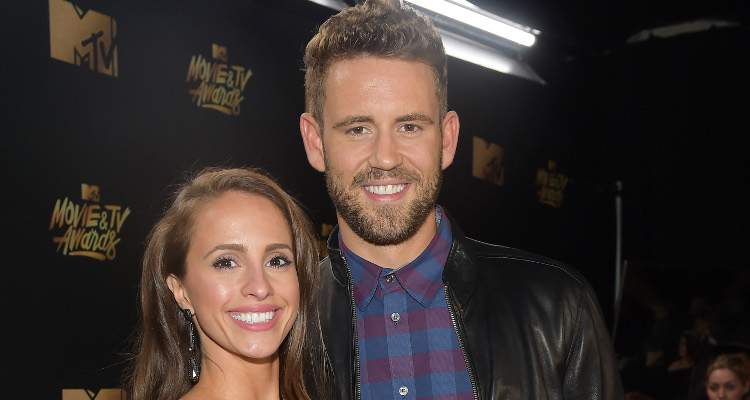 Another exciting season of The Bachelor begins on January 1, 2018. This time, the leading man will be Arie Luyendyk Jr. Last season, Nick Viall found love in Vanessa Grimaldi. But are Nick and Vanessa still together? Keep reading to know if, or why, Nick and Vanessa split.

Nick Viall’s season of The Bachelor marked his fourth appearance on the franchise, and was his latest shot at finding love on reality  TV. Nick and Vanessa from The Bachelor clicked on day one, and even before the spoilers were leaked, people hoped he would propose to her.

As many hoped, Nick Viall and Vanessa Grimaldi got engaged. Nick went on to compete in Dancing with the Stars, with his fiancée supporting him each week. Are Nick and Vanessa still together? Reports say no. What went wrong in their fairytale engagement? If you want to know why Nick and Vanessa split, then keep reading as we have the scoop right here.

Why Did Nick and Vanessa Break Up?

Nick lived in Los Angeles and Vanessa lived with her family in Montreal. The couple reportedly called it quits five months after the finale aired. A source close to the couple revealed, “Nick and Vanessa have wanted to end this for a while now but was trying to figure out the right timing.” Another added, “Vanessa is home in Montreal with her family and Nick in L.A. with friends. Both are just laying low. They are still very much in contact with each other and trying to be there for one another. Despite not being able to make the relationship work, they were always there for one another and that’s not going to change. Especially right now as they both try to pick up the pieces and move forward.”

After their split on August 25, 2017, the two released a joint statement which read, “It’s with a great amount of heartbreak for the both us as we have decided to end our engagement. We gave this relationship our all and we are saddened that we did not get the fairytale ending we hoped for. We will continue to be there for each other no matter what. This hasn’t been an easy decision, however, as we part ways, we do so with lots of love and admiration for each other.”

Many fans speculated that their relationship wouldn’t work, but the couple tried really hard to sort out their long-distance relationship. In an interview, Vanessa explained, “My relationship with Nick and experience on The Bachelor has given me so many amazing and memorable moments in my life, and I am forever grateful. Nick and I were always transparent about the challenges in a relationship. We certainly had ours. I fell for him hard, and when you fall in love that hard, your heart breaks even harder.”

She further added, “In the end, as much as we loved each other and tried to make it work, we just realized we were different people fighting to keep a relationship when ultimately we just weren’t’ the best fit for each other. It wasn’t the distance that was ever an issue. Both Nick and I decided together, with our families’ support, that I would put my teaching career on hold and uproot my life to Los Angeles to support him on Dancing with the Stars and build a life together.”

Vanessa has no hard feelings for Nick and wants him to find the right person saying, “When you fall in love with someone with all that you have, it’s hard to let go. Every part of you gets shattered. I’m trying to pick up the pieces. … I hope he finds his person and his happily ever after that we unfortunately couldn’t find together.”

Nick and Vanessa made an adorable couple, and fans are disheartened that they will not see them tie the knot. We hope that they are both able to find love again.