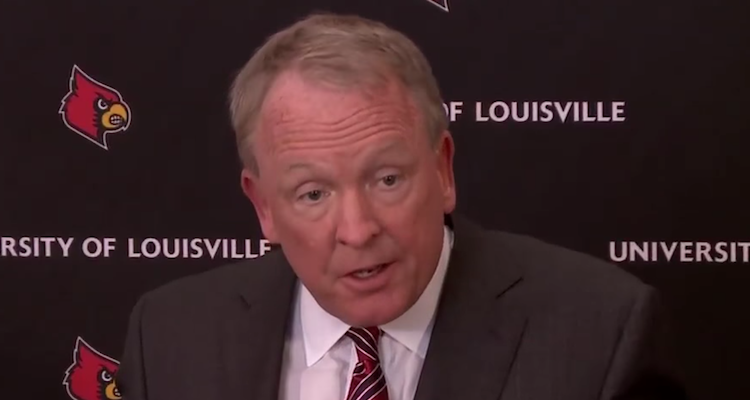 In August 2015, word began to circulate that a book was being written by a former escort named Katina Powell. The book, Breaking Cardinal Rules, went into great detail about Powell’s involvement with the University of Louisville’s basketball program.

In the book, she went into detail about parties that were thrown from 2010 to 2014 for the Louisville Cardinals players, as well as players they were trying to recruit to the school. These parties involved Powell and a number of other women, who were allegedly paid to dance, strip, and have sex with the players.

According to Powell, not only did the coaches know this was going on, Andre McGee, the head of basketball operations in Louisville, was the one who was paying for these parties and girls! Many of the parties were even alleged to have taken place on school property. There were also indications that then-coach Rick Pitino may have known what was going on.

With the book becoming known to school officials, the University of Louisville began to look into the allegations. They hired an expert in NCAA compliance and joined forces with the NCAA to see if the allegations were true, and if they were true, what NCAA regulations were broken in the process?

The investigation took place in stages and the University of Louisville did its best to mitigate the damage. In February 2016, the school banned the team from participating in the NCAA tournament. In April 2016, the school handed down self-imposed sanctions on scholarships and recruitment.

The Hammer Comes Down

In October 2016, the NCAA handed the University of Louisville a notice of allegations. Among the more serious are those leveled at McGee, who was accused of providing impermissible inducements and extra benefits to at least 17 Louisville recruits or Louisville athletes, as well as violating the NCAA’s ethical conduct policy by not cooperating with the investigation.

By the time these allegations were made official, McGee was long gone from Louisville, as he became an assistant coach with Missouri-Kansas City in 2014. When the University of Louisville responded to the allegations in January 2017, they threw McGee under the bus, claiming that he acted alone and was the sole person responsible for the allegations.

The NCAA Makes Their Judgement

In June 2017, the NCAA committee on infractions handed down their judgment to Louisville —and it was harsh. While the committee did accept the fact that school placed restrictions and punishments on itself, that wasn’t enough. The NCAA vacated the victories that the team had during the period in question.

That means that Louisville’s victories have been vacated during a period that stretched from December 2010 to the end of the 2014 season, including a 2012 Final Four appearance and a 2013 championship. In conjunction with this, Louisville must also pay the NCAA an estimated $600,000.

Obviously, this did not sit well with the team and they instantly appealed the decision.

But as of yesterday, the committee upheld its ruling. Louisville University’s interim president, Gregory Postel still feels the punishment is too harsh. “I cannot say this strongly enough. We believe the NCAA is simply wrong to have made this decision,” he said.

Louisville now has to take down their championship banners and their wins have officially been stricken from the record. In the meantime, they will continue to rebuild their public image as this terrible scandal hopefully mulls over and they learn from these mistakes.