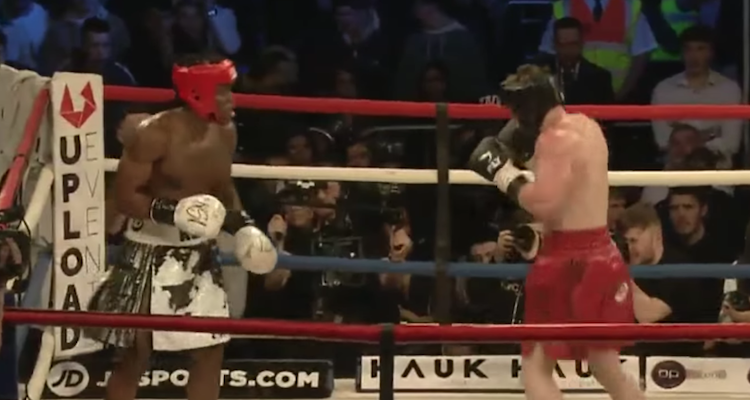 Danny Partridge vs. Greg Brady, Screech vs. Horshack, Manute Bol vs. William “The Refridgerator” Perry. In the grand tradition of terrible celebrity boxing matches, yesterday we got to see KSI vs. Joe Weller! While the fight wasn’t pretty, it had millions of people watching live, and even more watching the video afterward. But why did KSI and Joe Weller fight in the first place? Keep reading, we have the information you need!

Who Are KSI and Joe Weller?

For those of us in North America, KSI and Joe Weller aren’t exactly household names. But in their native land, KSI and Joe’s YouTube channels are huge!

KSI is a YouTube star who began his career as a video game reviewer and commentator, and has since morphed into a rapper. And he isn’t some sort of niche artist either; he currently boasts over 17.0 million subscribers!

Joe Weller is the other side of the YouTube celebrity coin. Weller’s channel includes videos of him publicly performing pro-wrestling moves in the middle of public areas, exploring abandoned buildings, and commenting on other people’s YouTube videos. While he doesn’t have the following that KSI does, Weller does have over 4.0 million subscribers to his channel!

Why Were They Fighting?

So, why were KSI and Joe Weller fighting in the first place? In a word, money. Up until they signed for the fight, KSI and Weller did not have any real beef with one another.

The idea of the fight began after Weller posted a video titled “BOXING MATCH: Joe Weller Vs Malfoy.” The video featured a legit boxing match between Weller and his frequent YouTube co-star, Theo Baker (nicknamed Malfoy). We’re pretty sure it’s legit because the fight was actually terrible! (Like, if you were going to stage a fight, you’d want it to look a lot better than that! C’mon!)

With that video and Weller’s victory, Weller proclaimed himself the champion of YouTube boxing. KSI commented on the video that he’d like to take on the winner. Negotiations began and the fight was set for the Copper Box Arena in London.

To Weller and KSI’s credit, they took to building this fight rather well. Taking cues from some of the best smack talkers in MMA and boxing, the two immediately started making training videos, as well as diss tracks and insult videos.

With a sold-out arena of 8,000 seats and an undercard made up of other YouTube celebrities, fight night came with high hopes. The two men entered the ring and the streaming version of the fight had over a million viewers watching as they touched gloves when the fight began.

To borrow a phrase from pro-wrestling announcer Jim Ross, this fight was “bowling shoe ugly.” Kind of like watching two sixth graders flapping their hands at one another. Again, we’re pretty sure it was legit because you wouldn’t want to fake a fight that badly. KSI ended up taking the fight in the third round with a “technical knockout.”

KSI may not be a great boxer but he does understand the principles of building a fight. After his win, he congratulated Weller at being a better opponent than he expected. And then the call outs began…

KSI proceeded to call out former soccer player Rio Ferdinand, as well as Logan Paul and his brother, Jake Paul. He capitalized on the fight and set up a number of other potential fights with an audience watching.

We’d certainly like to see Logan Paul step into the ring. He’s got the controversy to his name and, if we dare say so, a very punchable face!

Hey, if the fight isn’t going to be good, it should at least be fun!